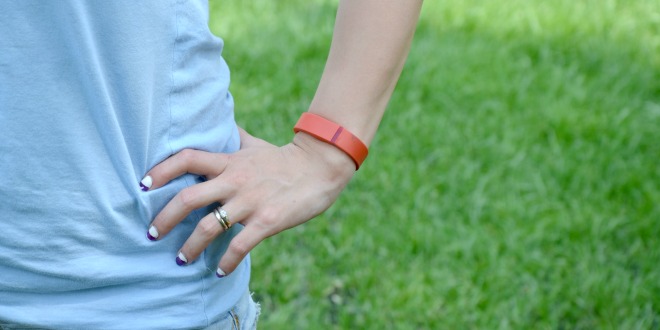 When I started my weight loss journey I was a bit of a virgin to anything health related and I certainly wasn’t bothered by how many steps I took each day. Gradually I’ve watched my weight slowly come down and I’ve been feeling far more energised recently. I’ve been wearing a Fitbit Flex for nearly two months now and I am honestly shocked at just how different this little device has made my life.

Ultimately, the Fitbit Flex is a pedometer. There are five other pedometers in the Fitbit range, starting with a simple clip on one all the way to a Fitbit that has GPS tracking and a heart rate monitor. The Fitbit Flex sits in the middle of the range, although it doesn’t monitor your heart rate it does have some great features.

The Fitbit Flex comes in a really neat plastic packaging and has two sized bands included – small and large. There are ten colours to choose from so there’s something for everybody. The band is soft silicone and clicks easily together with a simple connector. The Fitbit Flex itself can also be removed from the band and placed in a different colour band to mix it up a little depending on your mood or season.

The Fitbit Flex is super easy to set up using the provided USB bluetooth dongle or by setting up from your phone. It takes just a few minutes if that.

At first I was a little bit worried by the rubbery band. It felt a little sweaty and uncomfortable at first but I think this was purely because I do not usually wear a watch. But as the days went by I felt my Fitbit less and less to the point where I physically have to look to remind myself that it is actually there. I’ve even been known to wear it in the shower accidentally so thank goodness it is water resistant enough for me to quickly get it off. Anyway, the Fitbit Flex is designed mainly to track steps and movement. I’ve found it so interesting to find out how many steps I do each day. As a parent, you always feel like you’re running after your children all the time but according to my Fitbix Flex I’m quite lazy and barely reach the recommended 10,000 steps per day. I left my goal daily steps at 10,000 nonetheless but you can set more realistic goals for yourself depending on your fitness or activity level.

The Fitbit Flex syncs automatically through wireless and bluetooth onto your phone or computer so by using the online dashboard or your phone app you can check on your stats and steps throughout the day or night. I think this is a really useful feature to have and the fact it can be synced to a computer without the need for a phone is also fab!

The Fitbit Flex doesn’t have a visual display as such to tell you how you’re doing with your steps, it shows these with little flashing LED lights on the display area. So if you are setting your goal at 10,000 you know that when there’s two solid LEDs when you tap the tracker then you’ve done over 4,000 steps.

One thing I have noticed about the step part is that it doesn’t monitor me pushing a buggy very well as my arms don’t really move too much. I tend to manually add a walk in the app to calculate rough steps and miles walked. The feature I’ve most enjoyed about the Fitbit Flex is the sleep tracker. I’m a mother of three children, one that sleeps perfectly once asleep and two that wake me in the night. I was really keen to see just how much shut eye I actually get during the night and whether I was justified in saying I was exhausted or not.

On the first night I had the Fitbit Flex set to sensitive. A big mistake. It had monitored every teeny tiny movement and had told me I had 4 hours sleep in total. The next night I set it to normal and I got a more accurate sleep reading of about 7 hours I think. In the past week or so I am getting fantastic sleep. P3 is sleeping through the majority of the time from 7pm – 6:30am, P2 still wakes about once or twice but has had two nights of sleeping through which has been great. I always get excited when I check my sleep stats.

The one downside is that you have to manually remember to put the Fitbit Flex into sleep mode by tapping it several times until it vibrates and flashes two LED lights. I have forgotten quite a bit but you can manually add the time you went to bed and woke up the next day which is fantastic.

The Fitbit app also allows you to add your food and water so you can set a weight loss or gain goal. You can also add friends and compete in certain step tasks which is very motivating. I also love the silent alarm function too which I have only recently figured out how to use. You have to set an alarm from your phone or computer, at your designated time your Fitbit Flex will vibrate on your wrist and wake you up. This has been great for me as it means I can wake and have a shower without disturbing P3 with my loud phone alarm.

The battery life on the Fitbit Flex is astonishing. I charge it once a week and more often it will last longer than that. You can set up to receive email notifications when the battery is low or monitor it online or via the app. I was seriously surprised at the length of time if I’m honest. It also only takes a short amount of time to charge back up using the USB dongle that will also work in an iPhone charging plug too.

The Fitbit Flex costs £79.99 and I really do think it is worth every penny. It’s given me a huge motivational push to get moving and active each day. I’m also addicted to checking my sleeping patterns and adding my food intake. A fantastic addition to your day-to-day fitness. Tracking steps, sleep and food.