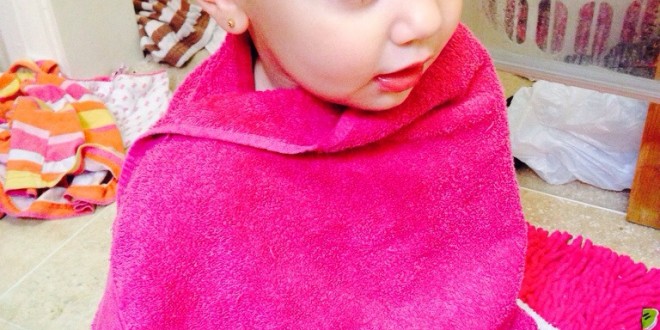 “For the first time in 17 months I actually enjoyed bathing P2!”

If you’re a regular reader, you’ll know that from day one P2 has been terrified of water. Well I’m writing today, the 12th day of July 2014, to tell the whole wide world that we have a breakthrough in the water department. We’ve been seeing little signs of improvement for a while with the weather warmer and outdoor water play being rather intriguing to P2s curious brain. P2 really enjoys playing with the water in the sink, I mean addicted! I can have a 20 minute peaceful shower whilst she stands at the sink splashing and running water all over her hair. She’s adorable. She’s at peace with the water until you add bubbles/soap and then all hell breaks loose again! However, baths were still a very big no no!

We had a tiny glimpse of hope last weekend in that department though. She’s becoming very understanding so I used that as my advantage. I explained to her about bathtime and that she didn’t need to be scared because it’s the same as when she plays in the sink, etc etc. Her answer was by crying, screaming like a last attempt for the bath to be averted. I didn’t add bubbles. We sat and spoke for a good 5 minutes before I plonked her in our make shift bath inside the shower. She was mortified and screeched but there was a few pauses where she splashed by herself. Hope! Tonight’s bath began much the same as last week. We talked about it with P2 crying. Then before getting in we splashed with the water and a mini cabbage patch doll. She calmed down. I then had a bright idea to get P1 upstairs to get in the bucket for P2 to watch seeing as all day they’ve been playing so wonderfully whilst I’ve been feeling poorly. It worked. P1 got out of the bucket so that I could put P2 in. There was silence. Shocking bathtime silence. P2 happily played in the water, swirling her toys around and even crouching down. I nearly cried. It’s clearly a fear of bubbles that she has because as soon as the hair wash made bubbles in the water she screamed and became the whimpering wreck that we’re used to. I quickly got her out to save too much heartache. Overall this is such an improvement and for the first time in 17 months I actually enjoyed bathing P2!

The next step is to get over the fear of bubbles. Any ideas?