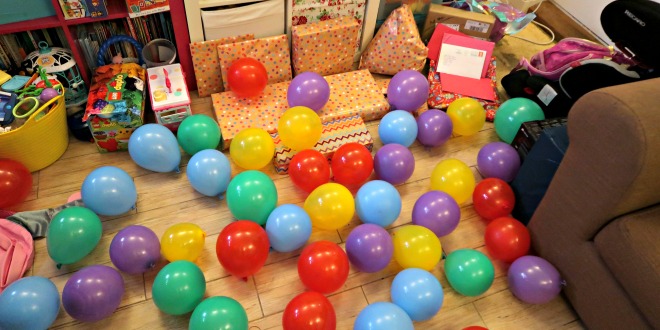 I definitely think that this year has been the first year that P2 has fully understood and felt the excitement of her own birthday. For weeks and months actually, she’s been excitedly telling me that she was going to go horse riding and that she’d be able to change her number from three to four. She had started added things to a birthday present wish list that was pretty extensive. On the evening of her birthday Hubby blew up fifty balloons and I tied them. We laid out her presents just like we do at Christmas time and printed off some little Happy Birthday banners. She woke late on her birthday morning and funny enough slept the entire night too. The first thing she said to me was “Is it my birthday now?” And as they came through their bedroom door P2 was greeted with a FaceTime call with her Nanny T singing happy birthday. I was so excited for our day, we had booked for her to go on her first horse riding lesson which was something she’d asked for since she could communicate. Then I received the text of nightmares, the lesson had been cancelled due to illness. I felt sick, went into a panic mode and started ringing around other riding schools. I felt terrible, there’s just two things in the world that P2 really wants and that’s a real dog and a horse riding lesson. I felt like I was crushing her dreams because there was no way we’d be getting a dog and there was just nothing that could make up for not going horse riding. Eventually, after a few tears (from me), I sorted somewhere else for her to ride very last minute and the relief I felt was overwhelming. My Grandad had come over for the day and after handing out birthday treats at P2s nursery, we headed off for the riding lesson. I wanted to cry with joy as I watched P2s little face when she saw all the horses in the field. She confidently introduced herself to the lady and was shown to the pony she would be riding. His name was Swift, he was a lovely white colour although I think the proper horsey term is grey. She borrowed a riding hat and instantly looked right at home. She was shown how to brush Swift and her little smiles were adorable, she was chatting the entire time about horses and brushing him. The lady, who I’ll just call T, let P2 lead Swift into the school and helped her climb on board. The photo I captured above was when she was having her stirrups adjusted, she looked over to Hubby and said “Daddy I’m on a horse!” It was the most adorable thing. She was so pleased with herself. I had been worried that she’d be scared but she wasn’t at all. We didn’t really know what to expect from the lesson as it was a last minute arrangement but we were so surprised. The attention and care T gave P2 was just so amazing. Not long into the half an hour lesson, P2 was leading Swift by herself. Controlling his reins and going over the poles. My Grandad kept saying “Oh she’s doing better than I remember you doing” which was hilarious. But I think he was right. It literally looked like she’d had so much experience and it was surprising to realise that actually this was her very first time. T even let P2 trot and I can remember this very cheeky, very excited expression go across P2s face as she trotted by us for the first time. So much love filled my heart. I will forever be grateful for T for arranging a lesson so last minute and making my daughters dreams come true. After helping to take all of Swift’s tack off, P2 and P3 who was now awake from her nap in the car, got to work brushing him. We’ve definitely found a new hobby for P2 and it’s something she’s pretty passionate about already. We have booked her to go once a week and she even used some birthday money to buy some better boots with a heel. After the lesson we headed home for some party food with family and to chill out for the afternoon and evening. P2 was super lucky to have her Great-Grandad, Nannie T, Grandad and Uncle there to celebrate her birthday with us. I felt much more sentimental than I have ever done for a birthday before. I don’t know why. I feel like this year will be a huge change for her and all of us really. With her turning four it marks going to primary school and P3 starting nursery. I definitely feel like I’m losing my little chunky baby and she’s suddenly turning into an independent little girl. She’s feisty but she’s just wonderful. I really hope that we made her birthday a special one. I’m also super glad I filmed our day too.