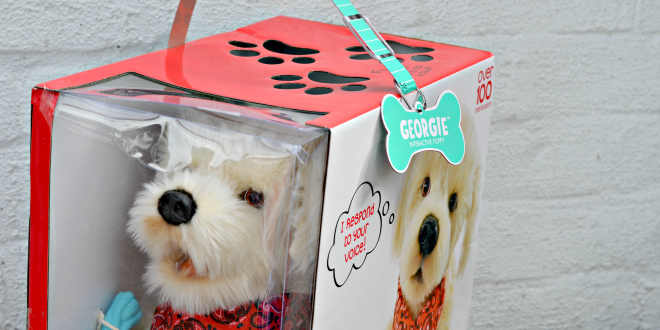 If you were to ask P2 what pet she’d love to have, her answer will always be “I want a Chihuahua”. Whenever she looked a photos of different dogs it would always be the little chihuahuas that caught her attention and that’s when she learnt the breed and ultimately has fallen in love. We don’t have a garden at the moment and so we can’t have a real one, until now! We have a puppy!! Ok, I lied he’s not real but he is just like a real puppy but only better. This is Georgie, the interactive puppy. He reacts to 12 voice commands and has 100 of his own interactions. He is super soft with plush fur, he comes with his own collar, ID tag, bone (rope toy) and a carrier. I think he looks super cute and friendly. I was quite shocked at just how life like he actually does look and although he’s not a chihuahua like P2 may have hoped for, she is smitten! Here’s the video of when she saw him for the first time: Georgie is suitable for ages six and above which I was a little confused as to why the age was so high, but he comes with a command booklet which proved quite difficult to teach P2 who is just three years old. The commands are quite specific and for a younger child who may miss out words then Georgie is not very responsive. Otherwise, when said correctly he is such a good dog which is why I think he might be better than the real thing. Oh and the no pooping too although he has been known to let out a bottom burp and a mouth burp on several occassions.

My personal favourite command or action that Georgie can do is the tug of war. You have to physically put the rope/bone inside his mouth but he will then lower himself, growl and pull backwards which is so life like apart from the strength obviously. I just think that’s great which you can see a snippet of action in the video below! Another great thing about Georgie is that his box can be used as a carry case and the handle can also turn into a collar for him. The bandana/scarf is super cute though and works great as a collar too. Georgie is going to make the best Christmas or birthday present for any child. He costs around £100 but you can get him for less if you shop around a bit. Our family adore him and he’s so clever and well trained so makes the perfect not-pet to have! I have created a little demo and unboxing video below which I hope you enjoy and can get to know Georgie much better.