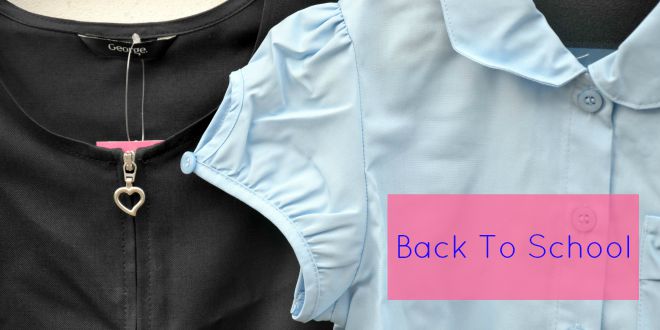 We are now in the summer holidays. Six weeks of lay ins for us, no rushing around getting ready for school and a whole new routine made. The start of September is fast approaching where my biggest baby will become a Year 2 pupil and enter the last year of Key Stage 1 or Infants School although she attends a Primary School. That gives me butterflies in my tummy and P1 is going to feel the change so drastically.

School can make or break you as a person. Routines change and personalities develop. There’s so many things to think about as a parent and as a child. There’s the homework, the making and breaking of friendships. Rules and policies. School uniform is obviously the major part of starting a school career.

I have been quite fortunate with regards to buying school uniform. Actually that’s a little bit of a lie considering P1 has had three schools and three uniforms, two sets of which were bought brand new but when it came to the third, the poor mite had to settle for second hand! But this is where I’ve been fortunate. P1 is a diddy little thing like me and she therefore doesn’t grow too much meaning that the clothes we bought her for reception are still fitting her now as she goes into Year 2!

But when George at Asda approached me to try out their Back To School range I just couldn’t say no. It was my sneaky excuse for P1 to have a brand spanking new set of uniform as she grows in her schooling journey. We ordered nearly everything P1 needs for school next year, going into Autumn means she wouldn’t need a summer dress and having just bought her some second hand ones I wasn’t too fussed about keeping them off our list.

For literally just below £70 we were able to get;

I’ve never bought uniform from George before but I’ve been pleasantly surprised by the items. P1 is smaller than an average 6 year old, measuring just over 1m tall. All of the George school uniform clothes were sized 5-6 years. The blouses fitted perfectly, but the rest of the clothes items were a little baggy which never bothers me as this will mean she has plenty of room for growing. Saving us even more money.

There’s a huge variety of uniform at George that I really didn’t know there would be. Loads of different pinafores and skirt types which was good as P1 was very fussy last year and upset when one of her friends had a heart on their zipper and she had a star. Children can really be that finicky at such a young age. I love the PE uniform too. I struggled last year to find some cycling shorts for P1. All I could find were the baggy football style shorts but George have cycling shorts and modesty shorts for under skirts.

The uniform washes really well and there’s barely, if, any creases to iron out. The quality is just fantastic and I am so pleased. With the prices at George are just ludicrous, in a good way, it means we can easily replace anything if we need to or if it gets lost. I can’t quite believe that we’ve managed to sort all of P1s uniform next year for under £70! Thankfully my Grandad has already bought her new school shoes elsewhere as her current ones broke a few weeks from the end of term. George have also got swim bags, lunch boxes, school bags and drink bottles with plenty of variety to choose from too.

I wonder if we will be buying second hand again if I’m honest.