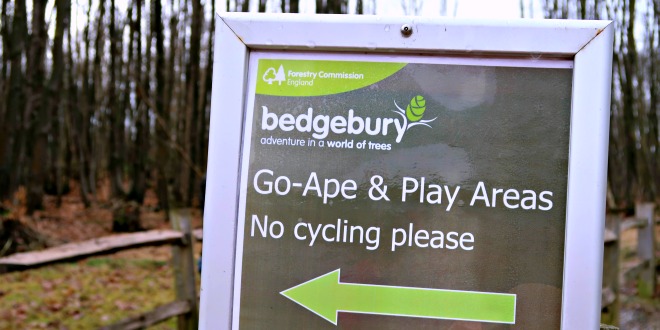 My middle daughter who has just turned four is a little dare devil. We realised this during a trip to Paultons Park last year. She wanted to go on all of the rides and she did, including the rather scary big ones more than once. She was fearless. Then whilst at Universal Orlando Resort P2 begged us to go on the big, upside down, rides and we had to say no because she was too small. The two of us have been clashing recently. I’ve felt a divide and definitely like Daddy is her favourite. I wanted to find something that we could do that was just for us. A bonding experience I suppose. I knew that something adventurous and daring would be perfect for her. I remembered Hubby’s birthday a few years ago at  Go Ape Bedgebury and quickly went to investigate whether P2 was old enough. If she was, this was definitely the thing for us. To go on the Tree Top Junior doesn’t have a minimum age requirement but you have to be over 1 metre tall. Thankfully, P2 is just over that so we booked a little adventure challenge. Because she is under six years of age, she has to be accompanied by an adult. I arrived at Bedgebury Pinetum feeling extremely nervous but definitely excited. I’m a little anxious about heights so this really was pushing me but I knew P2 was going to have an amazing time in the trees. The staff at Go Ape were super friendly. Our adventure time was booked for 10am, right in the middle of half term, but it was very quiet. We were the only ones there. We were fastened into our harnesses, they even had brand new hair bands for me to tie my hair up with which was great. P2 looked quite nervous if I’m honest and I could feel my own nerves started to turn my tummy. We went on the little practice bit which is about a metre off the ground. It was a chance to get used to the harness that followed us around and you have to manoeuvre by yourself around each platform. On the Tree Top Junior, you don’t have to unclip anything. Once you are on, you are on unlike the adult Go Ape where you have to unclip at different sections. P2 hopped over the planks of wood which no issues at all. Very unusually quiet but I put that down the the nasty cough she had that week. We then headed towards the main challenge. Climbing some steep stairs to the main platform which formed as a central zone for the two different Loops. We were told we was to go around the loops twice and there was a few safety things to bare in mind, like how many people on each section. As we were about to step off onto the first challenge, I had a sudden realisation of just how high we were. The fact I was putting my trust, my life and my daughters life into those tiny little ropes! P2 stepped onto the first plank. Then she froze in fear and started screaming. She kept saying that she couldn’t do it, but I knew she could. It was fear. One of the Go Ape instructors came over and offered to take her round with him. She didn’t agree but I really wish she had because I think he was taller than me, stronger and more experienced in monkeying through the trees. We turned back with P2 and took her safely down. I was gutted if I’m honest. Of course, I still wanted to conquer my own fear and I also felt like I needed to prove to P2 that I could do it. In fact I wanted to prove it to Hubby and P1 too. So I decided to go round by myself. My legs shaking and tensing all at once. Hubby had one task and that was to photograph and film me, however we were right at the beginning of P3 getting a chest infection and she was screaming constantly so he was distracted. Instead P1 took the camera and I actually love the photos she took of me in the trees. Her filming skills are a little shaky but she captured some nice bits of my adventure too. See that video below. I actually found the challenges quite hard, as in very tiring and really tested my nerves. The more freely swinging ones were the worst for my wobbly knees but I kept smiling down at my eight year old. The total length of the adventure is 249.5 metres long and the highest platform is 6 metres high. I’m not sure that P2 would have been able to complete parts of the challenge like there’s a bit where you are pretty much swinging from rope to rope whilst balancing along a tight rope. That was scary! But I did it and I felt proud of myself  despite it being a Junior Adventure tailored for younger adventurers. Poor Hubby had to survive a screaming toddler and P2 who was upset about the situation. I was really quite devastated that I didn’t get the chance to enjoy a bonding experience with P2. She’s definitely at the age where she feels fear. The Go Ape team were amazing at keeping P2 calm and trying to persuade her to have a go, even after she’d taken off her harness they still made sure she was sure.

We had a lovely exerpiecen with Go Ape, forgetting the poorly toddler and refusing to join in little girl. I would still highly recommend giving it a go with your child if they are above 1 metre tall as it’s a great thrill adventure. Here’s my little video of our day out, parts filmed by my eight year old.