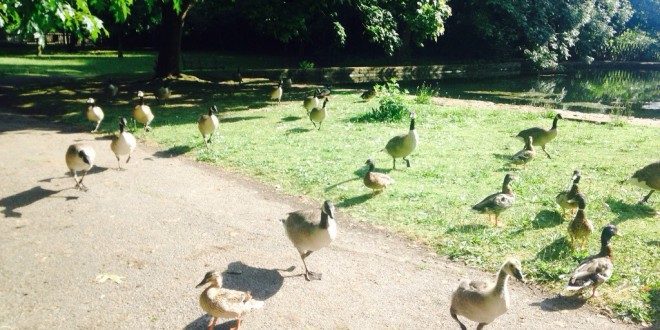 It suddenly dawned on me that I haven’t done my half way through the year Goals & Resolution round up. Looking at them I can see why I may have put it off. I’m doing pretty rubbish at crossing these off this year despite them being pretty easy ones to achieve. Ooops! Deep breath in!

1) and have her nap in the cot not in arms Well, she’s having the dummy less, mainly at naptime, bedtime and car journeys. Her fear of baths is still there but seems to very slowly be easing as she’s having them more frequently. I cut out the arm naptimes for about a week, then missed her too much, it’s also my chance to snooze on the sofa which is very much needed and lost when she falls asleep in the car. She only naps once so it’s not like it’s taking too much of my day away.

2) We have a routine, it wasn’t a fixed or planned one. It’s just happened really.

3) and exercise at least every other day We surprisingly have been eating better recently. We always have fruit to hand and our dinners are more planned too! I don’t exercise though, only walking or feeding ducks.

4) Go out more as a family and find more time for just P1 on her own I’m guiltily failing miserably at this. We have got a few days out planned for us as a family though in the next few weeks so hopefully it’ll change during the second half of the year.

5) Keep up with the house work Hahahahahahaaaaa! I don’t live in a dump but it’s no palace either. Enough said.

6) Join in with the Me&Mine, Siblings and Me&You photo projects with Dear Beautiful I felt my blogging content was getting too full of reviews and linky’s and not much of my own ramblings so stopped after the first month. I love the idea of this linky though so do want to join in next year a fresh.

7) Make sure to make time for friends – those with and without children What friends?

8) I organised my own Buggy Push. Granted, it didn’t get much of a turn out but I still raised lots of money and had a wonderful morning!

9) Visit my Grandad every week Sorry Grandad. It seems to have reduced to once every two or three weeks if we’re lucky and that’s very upsetting for me.

10) baby group each week I started to go to a play group near me, but it wasn’t really what I wanted for myself. P2 enjoyed it but the company just wasn’t great. I’ve been looking for other groups though now that she’s more active and adventurous. Something like Tumble Tots.

12) Have a date night once a month I cannot remember the last time we went for a date. I think it was our anniversary of officially becoming a couple back in March. We went for dinner.

13) Well this has clearly happened and will continue to happen for well… Ever probably? That’s how much I enjoy blogging anyway.

14) Shout less… Much less I’m trying. Really trying. But so is P1. Very trying with her behaviour especially recently. We’ll get there one day.

So I’ve managed to fully cross off four of my goals so far. Only ten more to go in under 6 months!