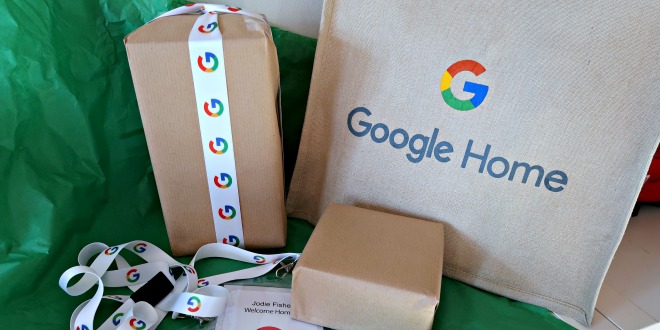 Going To The Google Offices & Getting A Google Home

During the Easter holidays Hubby and I had three full nights child free. The girls headed back to Essex with their Grandparents and it was a much needed break for us. During that time we did so many lovely things. We mainly visited National Trust places and ate out in McDonalds and Zizzi. Our adventures can be found on my YouTube channel in various videos I filmed. We had been invited to the Google offices in London to get a better look at the new Google Home so Hubby and I decided to make a day of it. We had a nice slow morning before heading on the train for an afternoon in London. It felt super strange to not have three children to care for and make sure they weren’t running off. The weather was particularly beautiful and I braved having my legs out and sandals.

The Google offices are so bright and colourful. I felt really nervous but shouldn’t have been because everyone is friendly and welcoming. We had a real close look at the Google Home and Hubby got to ask all the tech questions that he wanted to. Honestly, he was more excited than me as he has a real understanding of it all rather than my basic knowledge. After our little meeting we headed on to Oxford Street for some shopping and had a truly brilliant time just us two.

Hubby was really excited to get the Google Home set up in our house. For those of you who don’t know what I am talking about, the Google Home is a voice-activated speaker powered by the Google assistant. It is designed to fit in with your home rather than stand out. It looks a little like an air freshener in my opinion. You can also change the colour of the base for extra money so it really fits in with colour schemes and rooms. To set it up you literally plug it into the wall, download the Google Home app and follow the instructions. You need WiFi internet for it to work but this also means you can take it abroad with you which is brilliant. We actually had a struggle to get it working originally, it didn’t seem to recognise we had everything already downloaded and setup. Eventually Hubby got it working and for the rest of the day Hubby was having more conversations with the Google Home than with me.

The capabilities of the Google Home is amazing. From finding you a recipe, telling you how many calories something has, turning on your Netflix with the Chromecast or even playing music using Spotify. With extra adaptations to your home using the Philips Hue lights or the Nesr thermostats you can get Google Home to turn your lights on or off, the colour of them too and control the temperatures in different rooms. The speaker alone in the Google Home is so powerful. It has 11 volumes and sounds much better than a standard speaker. For us as a family, we mainly use it for Netflix and Spotify. We are looking to upgrade our lights and thermostats though to get a real feel of Google Home’s full experience. It sounds really lazy but now when the girls demands Mia and Me on Netflix, I don’t have to stop what I am doing to find my phone or iPad, I can just ask Google Home to put it on. I also love that when we don’t want the telly on but it would be nice to have some music playing we can do that too with the Radio stations or picking a playlist through Spotify.

It’s a new technology device and the Google Home is constantly learning. It has its flaws and doesn’t always recognise what we are saying especially the girls at times. On a whole though, I have been so pleased with our new assistant. It honestly makes life that little bit more simple in our busy family life. I really love that it can tell me the weather each morning too. That’s made planning for the day much quicker.

Here’s a little vlog from our day in London:

Disclosure: We received the Google Home as a gift from Google. We were not asked to write this blog post
Share
Previous Primary School Places The Second Time Round
Next My Money Managing Tips