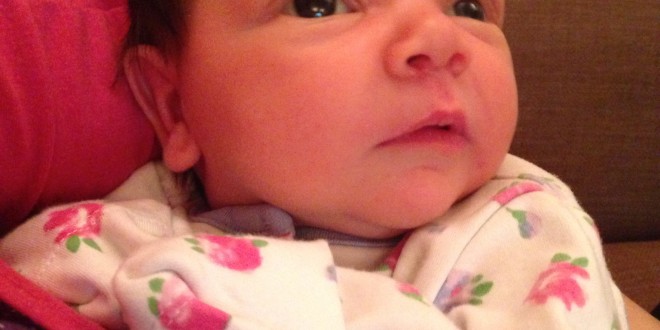 On Thursday we arrived up the hospital for P3s jaundice blood test. I felt really nervous about the whole trip because I wasn’t exactly sure what would be happening. Of course, Googling Jaundice tests didn’t help with my nerves. We were a little early so had a cheeky McDonalds breakfast. Our appointment was at 10:30 but typically we didn’t get seen until gone 11. Thankfully it was in a children’s ward so the waiting area was full of toys to keep P2 occupied. They asked us to collect a urine sample by placing what looked like a baby sanitary pad inside P3s nappy. I remember it used to be a bag that stuck around the outside of their bits when P1 needed one collecting. She was then weighed.

The doctor saw her. Asked us some background questions and decided that because P3 was feeding well, gaining weight and pooping correctly, that she’d only need one tube of blood taken and no urine sample. She proceeded to squeeze the blood from her heel. Then she asked a Registrar to come and take a look at P3s head. He said that although the fontanelle is larger than normal he wasn’t concerned by it and has asked that our midwife monitor the growth over the next few weeks.

We were sent home with the view that we’d either receive a phone call about her blood results if action needed to be taken or a letter in the post. We felt reassured by the lack of concern surrounding P3s head.

That evening I received a phone call. My heart stopped when they asked “am I P3s mum” and when she introduced herself as being from the hospital. I really thought something was drastically wrong. But she went on to tell me that although her blood jaundice level was reading high, there was nothing in her blood to suggest the jaundice was caused by anything other than breastmilk. I was advised not to change anything I was doing or eating, to continue as normal and that the jaundice will eventually clear up. It was just going to take a little bit longer than it normally would.

I feel very grateful for the efficiency of the hospital. We didn’t expect results for a day or so, but to have them back so quickly and to receive a personal phone call really put our minds at rest. There’s no words to describe the amount of relief that P3 is going to be ok. She’s certainly becoming a right little drama Queen!!