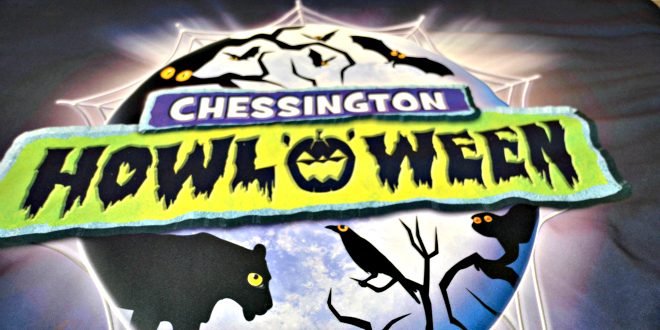 What better way to kick the Half Term off than with a special trip to Chessington World of Adventures. When this email found its way into my inbox a month ago I was so flipping excited that words just cannot describe it. We’d been invited to go and experience an exclusive preview of two new attractions for their Howl’o’ween week and to also stay in the Chessington Hotel. We’d told the girls all about our little trip so the excitement on the car journey was huge. Chessington is just a 30 minute drive from our house. The last time I went was over three years ago and it was the first time I met my Hubby’s mum. Arriving at the hotel was so exciting, I had no idea what to expect. We were staying in the Safari hotel and arrived early like usual but the staff were so accommodating. The hotel was all safari/Africa themed with a huge giraffe statue, an iguana enclosure and a TV with animal print beanbags. We were given a sheet full of details of the evening entertainment and explained how to get to our room. Our room was easy to find as it had spooky eye stickers on the door, it was also next to another door with eyes so I’m assuming another blogger was staying next door and I want to apologise if P3 woke them with her screaming in the night. The room was all dark as we walked in, you could see glow in the dark eyes staring around the room and the girls were so thrilled. As you walk into the room, to the left was the kids area which had one single bed and a put up bed. There was trick or treat bucket and a Samsung Smart TV. Going further down the corridor was the wardrobe, kettle with tea/coffee making bits and bobs. There were fake cobwebs all over the mirrors and ceiling adding to the Halloween feel. Our bed spread was the Chessington Howl’o’ween logo and so were the curtains. It was just amazing, then opening up the curtains you could see Zebras and Giraffes. The girls were in their element. We then headed down to the Temple Bar to meet the PR team organising the event for bloggers. We had the opportunity to try some of their Cocktails and Mocktails whilst we waited for the other attendees to arrive like I said, we are always early to everything. We don’t drink alcohol but the mocktails available for the little ones were: Swamp Juice, Orangatang and Kobra’s Venom. The Kobra’s Venom was a favourite with the girls as it is made from ice cream with chocolate sauce and sprinkles. I loved the Orangatang mocktail the best. Whilst we waited they brought out a African Land snail and a hissing Cockroach for the kids to hold and learn about. It was a lovely way to keep all the kids entertained as we waited for park closing time. I recognised two other bloggers although only approached one of them as I’m super shy and P3 wasn’t feeling 100% so was quite demanding. There was such a lovely atmosphere though, everyone was happy and the staff were so friendly. A 5pm we were taken through to the park. There were still a few people left wandering around but it was still so strange to be wandering round a nearly empty theme park as it began to get darker. We were allowed exclusive access to the Wild Asia. We had so much fun on the dodgems (Tuk Tuk Turmoil) and it was quite emotional to think that I was with other bloggers having the best time. I then had the chance to try out one of the new live action attractions, Curse of the Lost Tomb. We were told that it was suitable for aged 8 and above, it would be dark and there would be things popping out. Don’t touch them, they won’t touch you. I figured that P1 would be ok to come round with me so dragged her in. You walk round into each section where there’s an actor that tells part of the story, around each corner there are spooky black figures that follow and scream and do the usual scary things you’d expect. Poor P1 kept squeezing my hand tightly and trying to run forwards. You’ll see in my video below her reaction after we came out. P2 also experienced the tomb with hubby, despite the staff warning us it wasn’t recommended for that young, P2 being how she is would not let Hubby out of her sight. Hubby said the actors did die it down a bit of her and she was quiet the whole way round until she came out where she cried from relief. Her terror was soon over though as we moved onto the next attraction. Trick or Treat Wood is another live action attraction with actors telling a story. The sun was nearly down by then so the sparkly lights and lit up pumpkins were so mood enhancing. Again, you are greeted by a member of staff at the attraction entrance where they go through the health and safety bits. Like the Curse of the Lost Tomb, you are taken through to each actor as they tell a story. P1 had to answer a simple question of 4+3 to decide whether we would take the Trick path or the Treat path. Thankfully she got it right so we headed down the treat path full of fairies and happy colourful things. At the end we were all given a healthy treat. It was a really lovely, light hearted attraction suitable for all the family and even P3 was in awe. Chessington World of Adventures Resort is open until 8pm for the duration of the half term meaning you can experience the rides in the dark and I really really urge you to do this because it was such an amazing experience. It is a totally different theme park in the dark. After we had experienced the rides and two new attractions for Howl’o’ween, we were taken back to the Temple Bar for our complimentary dinner. A bucket of goodies was also waiting for us which included tickets for Chessington the next day. A complete surprise and it just made our little trip that whole bit more amazing. Dinner was buffet style and the choice was really good for both adults and children. I don’t think I can ever truly enjoy a meal when all three children of mine are involved as one needed a drink, the other a wee and then P3 just wouldn’t sit still or eat but having said that it was so much fun. The girls really loved the monkey’s that looked like they were going for a wee on the temple, P2s words not mine, and the lightening and sound effects changed every now and then for a real spooky feel. We then went and joined in with the family quiz, where we came as joint runners up to win. I had to do a dance off with another man to win a prize. Unfortunately, fear took over me and the other man was awesome and he won. The girls were really disappointed with me and you can see my awful dancing in the video below. I found the pillows and bed pretty hard if I’m honest but I’m used to a really puffy bed topper and soft pillows. P2 and P3 had restless nights, nothing out of the ordinary, but despite this they woke up later than normal and so it was a rush to get ready to be down for breakfast in time to meet a Madagascar character. But we did it, in time to eat our buffet style breakfast and see King Julian before packing our bags up and heading into Chessington. P1 kept asking if we were staying another night as she really loved the hotel and a part of me felt so sad to have to tell her no. The girls really change when we go on holiday, they get a little hyper, but they just thoroughly enjoy themselves and smile so much. That’s all I want is to see them smile. The previous evening was as magical as it gets for us but to have the tickets that allowed us to enjoy a full day at Chessington meant we could spend much more quality time as a family. P2 went on nearly all the rides that she was able to within height restrictions, including some pretty fast ones that P1 refused to go on as she was too scared. I did a lot of waiting around with P3 as any parent does when they have a young baby and rides are limited for them. Before we went home, we headed back to the hotel and into the Savannah Splash swimming pool. We were really excited to be able to finally use a swimming pool that was catered for the children. Unfortunately, the chlorine levels were wrong so they had closed the children’s part of the pool with the animal statues and slides, but they were able to use the tiny bit of the main pool that they could touch the bottom so all wasn’t lost. The changing rooms were really tidy and the staff so helpful. The lockers take a £1 coin which you get back after. I felt really sad getting in the car and waving goodbye to the Safari Hotel and Chessington. It sounds really pathetic but we truly had such an amazing experience, not only at the PR arranged event but just as a whole at Chessington. We have created lovely memories and I’m also so glad I took the video below of our little trip. I’m so grateful to have been invited.

The Howl’o’ween event runs from 23rd October to 2nd November so hurry down to Chessington because it truly was an unforgettable event. There’s lots of thrills, howls and half term family fun with jumps, goosebumps and rides in the dark as the park is open till 8pm this week!
Share
Previous Letter To My Princess 2 – 2 Years 8 Months
Next Why I Hate School Holidays