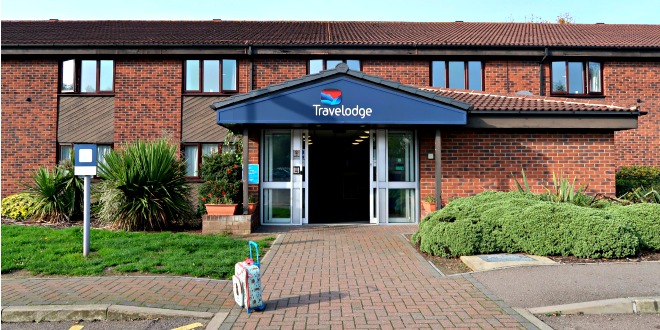 Before our amazing Universal Orlando trip was arranged, we had plans to head to Norfolk to see Hubby’s Grandparents. I actually hadn’t been up to their house in Norfolk before which meant the girls hadn’t either so this was a trip I was really excited about. As there is a lot of us we decided to book into a local Travelodge hotel so that we didn’t take over his Grandparents house. Our date to visit happened to fall on the same day that we returned from Orlando. So we took our very tired bodies straight from the airport and up to Norfolk. It was about a three hour car journey and after not getting much sleep on the plane, I managed to get three hours during the car journey and so did the girls. We arrived around midday to a warm welcome by his Nan and Grandad. We had a lovely chilled out afternoon at Hubby’s Grandparents. I’m not entirely sure I was completely with it and could feel the jet lag really creeping in to my body. We were served some delicious teacakes. The girls spread themselves out across the lounge with their cabin luggage and they really enjoyed interacting with their Great-Grandparents. P3 was a bit emotional and I managed to get her to sleep for an hour or so. We checked in at the Great Yarmouth Acle Travelodge. It’s situated off a roundabout along with a petrol station and Little Chef. The lady at the reception was really friendly, gave us our room keys and explained a few bits. There was an odd smell lingering the hallways that wasn’t a clean or a nasty smell, just strange. We had booked two rooms as you aren’t allowed five in one room, however was a little disappointed when I realised they were not interconnecting and it did leave me wondering how they expected us to manage three small children between two rooms. The room had the basics of teas/coffees and some bottles of water. They each had plenty of towels, a TV and hand lotion and body/hair wash in dispensers above the sink and bath. The bathrooms had an over the shower situation and were pretty basic in terms of appearance. I think I drew the short straw as Hubby ended up having a room to himself and I was sharing with the girls. Of course, he had an amazing night of sleep and I didn’t.

This specific Travelodge doesn’t have it’s own restaurant on site but you get 10% off your bill when you show the Little Chef your room keys. So we dined over in the Little Chef for dinner which was pleasant enough and the food was just delicious. I think we were all feeling a bit of a come down following the luxurious holiday we had in Orlando. In the morning we picked up some breakfast boxes from reception. These were actually really well equipped with cereal, muffins and energy bars plus little juice drinks too. We took these with us to BeWILDerwood. Apart from seeing family in Norfolk, I was pretty excited that Hubby had finally agreed with me to go to BeWILDerwood. I last went around six year ago when P1 was a baby with my family and had an amazing time but haven’t been able to return since. It was just as I remembered it. The entrance has a tall castle looking house that you can go in and bright signage to show you your way to book tickets. BeWILDerwood is a huge outdoor adventure zone for all the family. There are treehouses, zip wires, jungle bridges, storytelling, boat trips and marsh walks. We actually went during Halloween week and the last day that they are open until February 2017. So that was timed pretty well. BeWILDerwood is based on the magical series of children’s books written by a local author, Tom Blofeld. The characters feature throughout the forest and they have set times for story telling too. I love how they had pumpkins all over the forest. Hubby and I had an amazing time racing after the girls as everything is suitable for adults too. The girls were able to roam free in the woods and it was lovely to see them smiling. They just love being outside. It is where they flourish the most. We had originally decided to join in with the lantern parade so that girls had sat for a long time making their own lanterns. But as the sun started to set, the girls began to get irritable and so we decided to head back to Hubby’s Grandparents to have some dinner. I was definitely pleased to be served up a delicious Sunday dinner. After dinner we were able to chill out and chat for a little while. We decided that the awkwardness of our sleeping arrangements just wasn’t worth staying another night and so we travelled back home at around bedtime so that the girls could be transferred from the car to bed. This didn’t quite go to plan and we ended up having P2 and P3 downstairs with us until after midnight. It felt good to be home and we had a lovely time in Norfolk seeing family and making more memories. I vlogged our Norfolk adventure which you can view below. I would recommend the Great Yarmouth Acle Travelodge if you are looking for a place to sleep and that is it. It is very basic but perfectly comfortable for a smaller family than ours. The prices are affordable too which is always a good thing if you want a little weekend break.