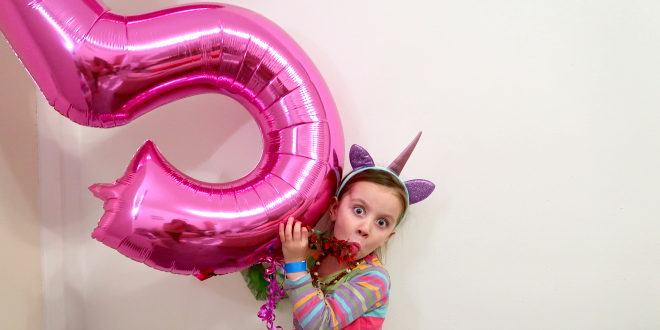 I had every intention of writing this post up much closer to her actual birthday. I can’t believe it was over a week ago now and that we have a five year old! P2’s birthday was a big deal for her, as each year goes by she seems more and more excited. This time we’d been counting down the days since it was about fifty something to go. Finally the day arrived.

The night before her birthday I filmed the “what we bought my 5 year old” video. Her birthday is so soon after Christmas and she had very specific present ideas which actually made it rather difficult to buy for her. I also never know if we get enough or too much for birthdays. We did the usual of taping a banner of two up and blowing balloons to put around the presents. I expected P2 to be awake really early, excited from anticipation but actually I had to physically wake her up. Sadly her birthday was on a school day so the present opening had to be done swiftly. I always hated having my birthday on a school day as you never had time to play with all of your new things but actually I think P2 was really excited to tell all of her friends.

I had to pop into town to buy a last minute birthday badge that she was desperate to have. I dropped it in to school which I later found out that P2 was so thrilled about. We handed out lollipops to all of her class mates before heading to Clip N Climb for her birthday treat. We always let the girls pick a treat on their birthdays and this was also what P1 did for her birthday. We invited my Mother-In-Law on our trip . The climbing venue was very quiet and everybody had such a brilliant time. After the adventure we headed to pick up some McDonalds for everybody round our house. This was definitely welcome after all the climbing the girls had done.

When we got home there was more present opening, unicorn cake and generally enjoying her day. I felt sad that she’d been at school for the majority of her birthday, but she loved every second of it. I have filmed our entire day which you can view below. I still feel in denial that she is five years old.