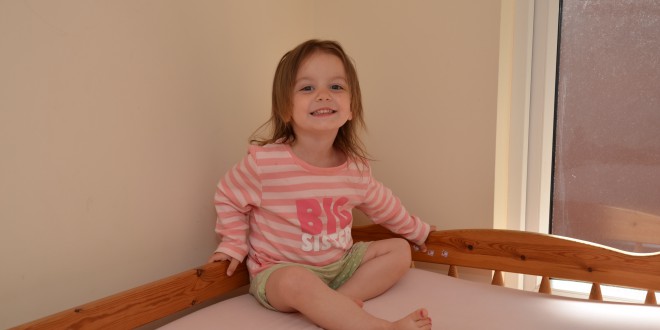 “Her face was tear stained and she held my hand tightly”

P1 has once again been awful at bedtime and even managed to fall out of her bed, which is over 4ft tall, an hour after being put to bed and after numerous times of telling her to lay down and go to sleep. I struggled to find sympathy for her. That sounds so mean but she didn’t cry and there was no bump. Instead she sort of smiled at me like she knew she was in the wrong. I was livid. But this post isn’t about her because quite frankly I feel like a broken record in real life and on my blog when it comes with P1s behaviour at the moment. Instead it’s about P2. That one has always been our little bruiser. Our chunky monkey. Most definitely the tomboy of the pack at the moment. She’s the one we have to keep an eye on because she’s such a little dare devil.

Last night I wanted to cry, at nearly 1am P2 had already had me awake five times since I went to sleep at 10:30pm. I was beyond frustrated and exhausted by morning but tonight, I got a glimpse of the tiny toddler she is deep down. The way she needs me to be there sometimes when the sun goes down.

P1 had disturbed her with the fiasco she had caused and had been given another bottle of milk to settle her, but half an hour later P2 seemed to enter her night terror/panic attack routine. Only this one was slightly different. She was more aware and responsive. She’d asked for milk but I’d consciously told myself that I wouldn’t get her anymore as she’s already had a bottle in the day and now two this evening. P2 continued to scream and cry for 15 minutes. Getting herself in to a complete state. Flinching and gasping as she cried. I stayed strong regarding the milk but was left completely powerless to help her as she didn’t want anything else. Hubby tried to calm her, reason with her but nothing did the trick. Eventually, she calmed enough for me to ask her if she wanted me to snuggle in the bed with her which she did.

There we lay. In the darkened room. She’d calmed and was now left with the gasping breaths that happens when you’ve cried a ridiculous amount. Her face was tear stained and she held my hand tightly. Suddenly it was me crying, tears rolling silently down my own face as I held her hand and felt her warmth beside me.

She wriggled and turned herself away from me letting go of my hand. Then a few seconds later her hand was searching for mine again. She needed my comfort and I needed hers. I felt thankful and proud, lucky and overwhelmed by love. Our cheeky toddler had instantly become my tiny baby again.

P2 was soon back to sleep. I left the room wiping my own tears. Sometimes you need moments like these to fix you back to earth. To feel thankful for the family you have even through the darkest of days. Tomorrow morning I will hug all three of my girls tightly and thank them for being mine. Share
Previous Arla Big Milk Review
Next My Mum, In The Eyes Of A 2 and 6 Year Old