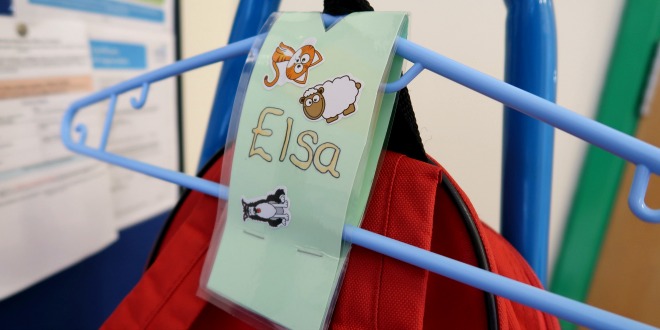 Her First Day At Preschool

I have read so many posts in the past week about parents feeling emotional about their children starting school. I’ve never been able to relate to that feeling, I’ve never really felt that emotional attachment to my children, the sentimental need to keep drawings. In fact I thought I had something wrong with me until today.

I had little sleep from tossing and turning. I woke with a pounding headache. I felt sick. The only way I can describe it, is when you wake at 4am to head to the airport for a big holiday. You have butterflies from excitement and a sicky feeling caused by the unknown all at the same time. I couldn’t eat my breakfast this morning despite being so hungry. In fact I could barely put my make up on because tears kept rolling down my cheeks. I did not expect to feel this way today. Sending P3 to preschool was something I’d been waiting for for a long time. It was a chance to be relieved of the demands, the frequent screaming and to be released from having her attached to my hips the entire day. Yet now the day had came I felt guilty with this strong urge to keep her home for longer.

With a heavy heart and shaky hands, I bundled our forever growing daughters into the car. I dropped P1 off at the new drop off and the rest of us then headed to preschool. I put on a brave face. The face I thought would be my true happy face of a mother who was about to get a bit of a rest and time to breathe. She walked in to preschool absolutely fine, P3 sat at the table to begin an animal puzzle with her teacher. We all said goodbye and we walked out.

There was no tears. There was no “please don’t leave me” like P2 had pleaded when she started preschool. P3 was fine. I left the preschool with my head still pounding, my lungs felt like they were being squeezed so I couldn’t breathe properly, I felt shaky and my heart felt heavy. It felt wrong to be leaving my little baby in the hands of somebody else. I had this exact feeling when P2 started the preschool too. I needed to keep busy and for the first time since P2 was under 18 months old, Hubby and I was able to spend some quality time with her. We promised to go and get her some new stickers to decorate her Sharing Book for school on Monday so it felt like a good time to do it when it was just her alone. P2 sang Moana songs and was lively yet the car felt so incredibly quiet without the demands and arguing of siblings in the back.

All morning I found myself asking P2 if she was ok. She looked really lost and lonely. I made a big effort to run around the park with her, chat to her and be her play buddy. Whether she likes her sister at times or not, she’s always there as a companion to talk to or argue with and I honestly think she felt like she’d lost her left arm just like I did. We took her to Greggs for a special sausage roll and we did have a lovely morning but it felt odd. After heading in to the popular toy shop that sells new and used toys, we headed for preschool to finally pick P3 up. I had expected the morning fly by and to have been left feeling robbed of time or something, but it didn’t. It went so painfully slow. My headache had slightly subsided but I felt drained from the crying and worrying I was doing. I wondered how she would have coped having someone else take her to the toilet, had she had an accident, had she cried, had she had any arguments with her new buddies, had she been well behaved?

The preschool open the doors and let them out one by one. We wasn’t first like usual as the new tables have a couple of keen Mums that we’ll have to beat to the post in future. She went running for Hubby at pickup. I sort of stepped back a little bit because I felt the tears prickling my eyes again and I knew if I hugged her I just couldn’t contain them. She looked so grown up clutching her little Bobo Panda bear coming towards us.

Her Key Teacher said that she hadn’t eaten her snack but she’d had a good day. I sort of expected that. I wondered how she must of felt in a total new environment by herself and being told what to do rather than how we have learnt to word things with her. After hugging Daddy she gave me a huge hug and I didn’t want to let her go in that moment as we walked back to the car. She seemed bigger yet so tiny all at once. Most importantly she was happy and she hadn’t had a toilet accident at all.

We had bought her a little toy car as a treat for her first day at nursery and P2 had got her a lolly pop. Look at that face though, I had worked myself up for absolutely no reason because she had such a lovely time. We love the preschool and I always knew that she would be fine. But letting go feels so much harder this time around. For the first time I want to clutch on to all of my girls and pause time to enjoy them as they are. Including the horrific bits of demands and sleepless nights. There is so much change happening in our lives and I am struggling to keep up with it all emotionally.