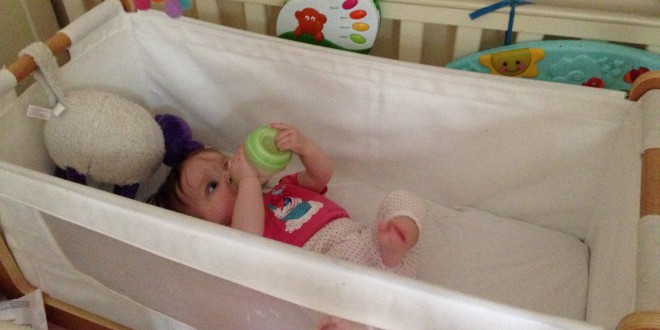 How Does Your Baby Self Settle?

At two years old, P2 is still waking in the night demanding milk on average twice a night. We’ve begun the “weaning” as such by reducing her intake during the day. She’s now limited to a cup in the mornings, not a bottle, and one 9oz bottle at night. I’m confident that she’s getting enough calcium as she’s having plenty of cheese, butter and yoghurts during the day like usual.

We’ve been doing this for just over a week now I think and it’s been going ok but she’ll still demand milk. The first night we implemented this new cut she actually ended up waking 4 times and each time she ended up having a full bottle of milk. I felt awful in the morning through lack of sleep and guilt. I’ve blogged about it before, I’m the reason she’s like this. I give in too easily just for the easy option and anything goes at 2/3/4/5am in the morning!

However, for the past three nights I’ve stopped giving her milk when she wakes. I give her a bottle of water. This is my attempt to weaning her away from waking to have milk. It’s been going ok actually and last night she slept through the night again. Tonight, she was playing up with P1 at bedtime and ended up drinking her milk before going to sleep. She cried a little which I ignored and she soon went to sleep with just her bottle of water. Progress However, somewhere along the line I’ve slipped up. Again. Deja vu. Anyone would think that I’d have learned from my mistakes when this happened the first time round. P3 is following in P2s footsteps with regards to milk. Obviously I’m not bothered that she’s having milk in the day because obviously she’s a baby but the part she is copying is using milk as a comfort.

Right at the beginning I proudly announced to my health visitor that no in fact she didn’t fall asleep at the breast/bottle unlike her sister and that wasn’t a fib. P3 would finish her milk in a drowsy state, be given her dummy and fall asleep within a few minutes. I was pleased. Hopeful for our future. She slept well too, waking twice a night which for a new baby was pretty good I think.

At just over 7 months things have changed. We’ve had a few pretty awful weeks of being woken every hour sometimes less. She uses the bottle as a comfort and literally screams blue murder when I replace it with a dummy when she’s drowsy. I’ve gone wrong and I don’t quite know when this happened. I don’t want to go another two years of broken sleep but I don’t know how to help P3 self settle. She’s not even that interested in her dummy and never has been really.

I guess I’m pleading for some helpful hints and tricks of the trade. I need to find a way to help her to help me. There has to be a way to break this horrid habit that P3 is now in. Help?!