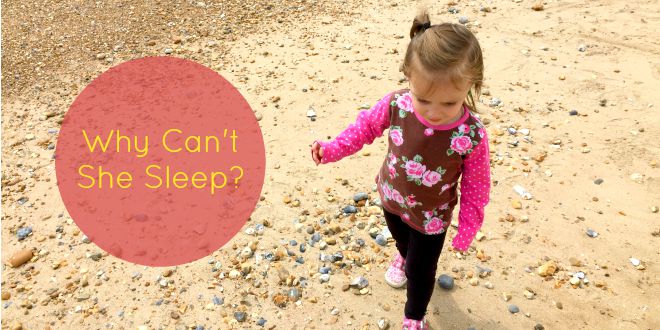 With a certain somebody headed quite quickly towards her third birthday I am beginning to ask myself why she doesn’t sleep yet. I have a nearly 11 month old who sleeps in the cot peacefully until morning, only really stirring when we go to bed or when her older sister shouts for me in the night. I wonder if P3 would sleep completely undisturbed if P2 slept.

We have a really small home for the five of us. I quite like it because it’s cosy but realistically we are outgrowing it rapidly and it certainly won’t be over forever home, or even our long term one. Ultimately, at some point we need to swap our rooms back around so that the girls have the larger one, all three in one room, and hubby and I will squeeze ourselves back into the smaller one. I originally thought that this would happen around P3s first birthday, which is next month. She’s ready and I feel her quality of sleep would be better if she wasn’t sharing a room with us.

But, and there’s a huge but in this situation and that’s P2! P1 is a deep enough sleeper to sleep through all the shouting and demands of her younger sister. She’s always been a 7-7/8/9 sleeper and I’m so thankful for that. P3 is beginning to join her on the good sleep path. But poor P2 still wakes every two hours pretty much every single day. It’s exhausting. I’ve had nearly three whole years of disturbed sleep and I can’t see it stopping any time soon. It started to get better and I thought we’d cracked it. P2 would wake once around 5am which in my opinion is not bad at all. Occasionally she slept through 7-6:30/7 which again was absolutely heaven. But it’s never been consistent. It’s never been enough for my body to actually reap the benefits of sleep. I don’t even know what we have done so differently with her than we have the other two who sleep near enough perfectly for their ages.

Google gives you all sorts of tips, tricks of the trade and general advice on how to get a perfect sleeper. It doesn’t work. Not for us. I honestly believe that she is just someone who will struggle with sleep. That there isn’t some amazing cure for her. We even had a sleep specialist in when she was just over a year old and we did what they advised and still she didn’t sleep. I can’t even truly blame it on the milk because she’s having it from a different style cup and not a bottle anymore but she still gets it topped up when she wakes. I need to stop that.

I’m still not sure that will actually improve anything. It didn’t when we tried only offering water and no milk at all for a while. She woke more, cried for longer and woke her sister up. Do you have a toddle that still wakes in the night?