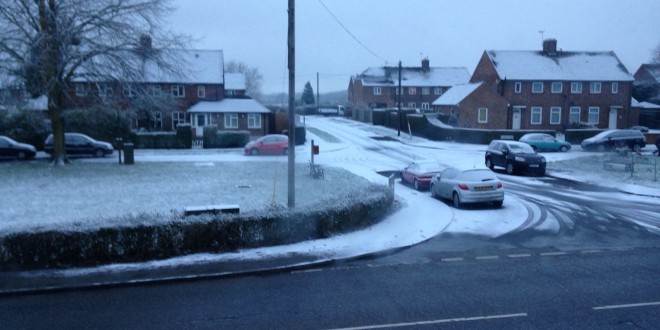 “I opened the window slightly to take a peek and there it was, a dusting of snow”

The blogging and social media world has slowly but surely been taken over by wintery, snowy, magical photos of children playing in the snow. I’ve longed for it to snow. It didn’t last year. My weather forecast app kept sending me weather warnings of snow and disruption. It would tell me it was going to snow at 1am, 11am … You get the picture. But the days came and went without a flake of snow.

This morning I could see through our frosted bathroom glass so much white. I opened the window slightly to take a peek and there it was, a dusting of snow. Not just ice, proper snow. Well… It was less than an inch but it had settled! I screeched like an excited child for hubby to open the bedroom blinds and for the girls to take a look.

“Snow!” Exclaimed P2. This is her first ever experience of snow, it’s P3s too! The last time it snowed she was perfectly snuggled up inside my belly. We were all due to go on the school run this morning anyway as we had a meeting at the school, so we all wrapped up warm and headed out into the snow. To our surprise the roads were clear (as in no snow on them) and the journey was just the same as always. We had to park a little way from the school but it gave us all a chance to walk in the snow. P1 was treading carefully, worried that she may slip but P2 was in amazement of the whole thing. Stomping and laughing. When they got into the school playground P2 ran off with her big sister to throw snowballs at each other. As soon as she touched the snow with her gloves she took them off and refused to put them back on saying that they were wet.

With all the excitement I’d completely forgotten to pack P1s swim kit for today. P2 started crying about her hands being freezing and we had to explain why she was meant to keep them on. The walk back to the car was fun. P2 was in her element. I remember P1s first time in the snow, she absolutely hated it and screamed the whole time!! There’s something about snow that just makes things completely magical and calm. It’s so pretty. Unfortunately, as quick as it came, it’s gone. I just hope we have a little bit more so that I can get some lovely photos of P3 in her snowsuit laying in the snow.