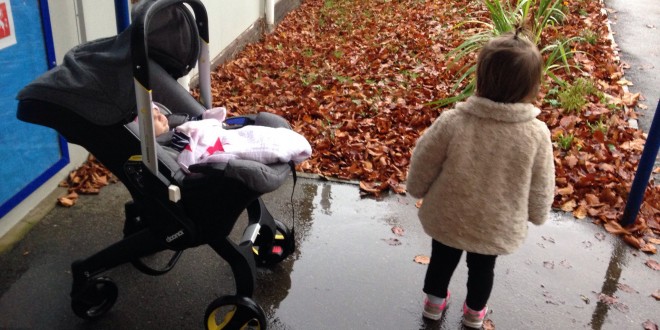 When P1 was born I didn’t attend any antenatal or baby groups, I was shy and very self conscious about being a teenage mum. With P2 I wanted to be different, I didn’t attend any antenatal groups but when she arrived I made sure I went to baby groups. We enjoyed a weekly session of baby yoga, I went to the breastfeeding group every other week and attended the weigh in clinic every month.

When we moved to Sevenoaks, I searched for local groups and began to attend a few. I never did any regular groups and to be honest I soon stopped going. Especially when I sold my car as getting to the groups became difficult. Now that P3 is here I’ve been watching P2 get rather bored and frustrated at home. I try to take a walk down to Tesco every now and then, we go to soft play sometimes and feed the ducks. But it’s nowhere near as much as when I was pregnant.

Now that I’ve stopped bleeding and am trying to get more exercise I’ve decided to attend at least two play groups each week. This morning was the first one on my list to attend. It’s held at a Sure Start Children’s Centre. My main goal was for P2 to interact with other children her age and to wear off some steam, I hope to make some friends too but it’s not a priority. I’m not a very social person face-to-face, I get nervous and struggle to hold eye contact with anyone but this morning I put on my makeup and told myself to be confident. I was meeting new people and could be whoever I wanted to be today.

Last time I went it was absolutely packed and P2 was younger so it felt a little dangerous. This time there was barely anyone there, it was quiet and I was able to put P3 in the baby area without worry of her being stomped on. P2 was so in awe and running between different toys.

But I noticed that none of the parents were really talking to each other. A few smiles but that was about it. There was this one lady who actually kept taking her child away from P2 or me whenever we were near them. It was very odd. I’m still going to go next week as P2 really enjoyed herself and there’s only a few months left where I can take them both to the correct aged group.