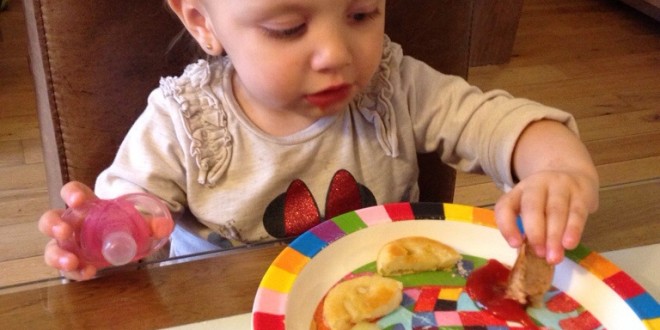 I didn’t get much sleep last night, the heat certainly got the better of P2 and she was very unsettled. She even joined us at 5am for cuddles and a snooze. I’ve been reflecting on the past week that P2 has had. P2 seems to have completely changed and her personality is very bold now. She’s hilarious. Her communication skills seem to have blossomed over night and figuring out what she’s asking for is pretty easy now. Yesterday, for example, we realised something that was so cute. It was after lunch, she’d lifted her empty plate of food and shouted “uuunn” it’s not the first time this has happened but we suddenly realised what she was doing. She was showing us that she was done.

P2 understands everything! When you speak to her you can see the way she’s listening intently and then she’d toddle off to do whatever it is you’ve said. Like “find panda”, her eyes and ears listen, then she looks around until she’s found him. She’s the most helpful 17 month old I’ve ever known. If we ask her to tidy her toys she does! It’s incredible.

Bath time has become a breeze. She’s actually had three baths this week which is crazy! All of them saw her happy and splashing up until it was hair wash time… But even P1 causes a fuss still at hair wash time so I’m feeling rather darn proud! At bedtime, I don’t have to assist as much as before. I used to feed her the milk until she fell asleep. P2 now feeds herself her milk, then wiggles around for about 15 minutes before falling asleep on her front snuggling her panda and sucking her dummy.

I’d be here forever if I was to document every detail. I’m just completely bowled over by her sudden independence and achievement. She’s such a joy to have around.