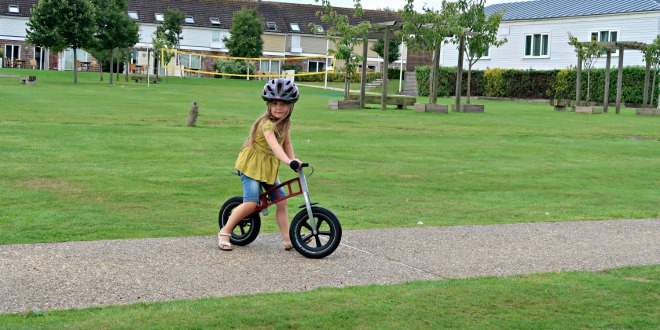 I lost count of the amount of times I had to refill bottles of milk during our first night at The West Bay Club. P2 and P3 did not sleep well at all, especially P3. She ended up in our bed at 3am. She’s not used to sleeping in a travel cot and is usually my better sleeper out of the pair of them. Going on holiday always disrupts the girls so I was expecting but didn’t realise just how badly it would be on that first night.

I had my first bath in the House Of Liz Earle. I managed twenty minutes wallowing in the water and it felt amazing. We had a it of an issue with the fire alarm as it went off after Hubby having a shower, but after pressing it and opening the bathroom window all was ok. P2 and P3 went outside really early in the morning to ride on their bikes and scooters. Everywhere was really quiet in the morning. P1 was very excited for her breakfast, she’d picked to have Weetabix which we weirdly never buy at home. She loves them and scoffed down three bars! We then headed out for a soft play area called JR Zone. There are only a few soft play centres on the Isle Of Wight and my girls definitely love a bit of soft play. JR Zone is in the middle of an industrial area in Newport. Our TomTom actually left us a bit stranded with the post code but good old Google Maps helped us locate it.

There is free parking at JR Zone and plenty of it. The staff welcomed us warmly and we were amazed at the size of the centre. JR Zone has lots of different themed areas within the play area. P3 absolutely hated the big skull on the wall at first. All three girls loved the Icy area and even I found that part amazing. You can see the different areas and how much fun we had in the video below. We’ve honestly never been to a play area quite like it. The food and drinks were amazing too, with delicious milkshakes and homemade cakes. The best part was that despite it being school holidays, the soft play centre was not busy at all and so we all had a brilliant time running about like loonies. When you arrive you are greeted with a large very posh looking building. You wander through the amazingly lit and beautiful smelling show room of jewellery. The girls were amazed. There’s even a section where you can pick your own pearl to have it made into jewellery. You then walk round to the cafe.

The cafe has such cute decor. We had a table reserved for us right near the window and the staff were all so friendly. The menu is quite extensive for a cafe and there was so much to choose from. In the end Hubby, P1 and I opted for a fish and chips, with P3 choosing to have a tuna sandwich. We didn’t have to wait very long for our food and immediately we were so shocked by the presentation of the food. The fish and chips was wrapped in paper and just looked amazing. We filled our bellies with far too much scrumptious food before heading outside to check out the amazing views. The IOW Pearl is in Brighstone which if you are looking on a map, is to the left of the Isle Of Wight. It is sat right on the edge of the cliff. Hubby was definitely on edge (excuse the pun). The views were amazing. On the way back to the car park we popped in to the Chocolate Shop which is attached to the cafe. We may have bought a bar from there which happened to get consumed before we arrived back at West Bay. Ooops! At The West Bay there is two swimming pools. An indoor 20 metre heated pool that has a depth of 1.2 metres. The outdoor pool is more child orientated, its shallow and has a cute elephant water feature with a slide going in to the pool too. The sun was shining, although still very windy, it honestly felt like we were abroad. The changing rooms are segregated into three; there’s one disabled/family space that has a shower and toilet inside with locker space too, then there is a male and female changing room. They are all so clean and tidy. The Country Club also provide towels so there’s less to worry about. When we got back to West Bay, we grabbed our swimming stuff and headed for the pools. I stupidly forgot to pack the girls swimming bands so we opted to stay in the outdoor pool to enjoy the sunshine and watch the girls splash around. They absolutely loved the slides and the elephant water spray. I always find it so funny that the girls get totally covered in water with not a care in the world, yet scream blue murder when you try to wash their hair in the bath. As part of your stay with West Bay you get complimentary Guest Membership to the Country Club. There are over 60 health and wellness activities each week in the Country Club. We had booked in for a few of the activities, some are a turn up thing and others have to be pre-booked. I booked Hubby for a Scuba Diving lesson which he was really excited about trying. We assumed that girls would be happy in the pool whilst he had his lesson.

It turned out that P3 had other opinions and threw a massive tantrum which lasted about half an hour. I was juggling three soggy kids, one of which was screaming the place down, by myself. It wasn’t the best of experiences but after running back to the holiday house to grab a bottle of milk to calm her down. We ended up enjoying watching Hubby have his scuba diving lesson for a little while before heading to the onsite playground. Hubby enjoyed his lesson although felt it was more kid focused in most parts. He loved learning how to breathe through the oxygen mask and swimming with the flippers. He’s actually said he’d love to go somewhere exotic and do it properly one day. That thought is slightly terrifying but I wouldn’t turn down a holiday abroad, obviously!

Swimming had apparently turned the girls into ravenous monsters. Each evening West Bay have “street food” where a little van thing comes and cooks different themed food. It happened to be Pizza night and Hubby had ordered a pizza before going in to his Scuba lesson. It is best to ring and order your food early rather than turning up, but both is acceptable. They only accept cash so we had to pop out to the cash machine in Yarmouth. As you can see from the photo below, P2 was rather emotional around dinner. She was exhausted from our day, we all was! After having some pizza I bathed the girls and got them into their pyjamas ready for bed. I had a workout session booked for the evening so wanted the girls in bed before I went for that.

I’d picked to try out the Dynamics Pilates session. I’ve only ever done a quick Pilates workout from a phone app so was really interested. The instructor was really lovely, she helped me get into a starting position and throughout the workout explained the moves and helped adjust anybody that was having difficulty. The dynamic part was that the pilates moves were done on top of a foam roller. It was the weirdest but most uplifting workout I’ve done in a while. I really enjoyed it. I got back to find Hubby completely stressed out due to P2 and P3 messing around. He said he went up to them about 30 times before allowing them downstairs for a little bit. It took the girls about one minute to call for me. After about half an hour both P2 and P3 gave in to sleep. I’m sure it was due to complete exhaustion. But P3 kept stirring and waking.

I eventually gave in and put her in our bed. Where she pretty much instantly fell asleep. There was no way I was going to be sharing our bed with her for the duration of our holiday, so quickly got out our ReadyBed to blow up. I transferred a completely delirious P1 into the ReadyBed and moved P3 into the single bed in the girls room. We had a better sleep, not perfect but it was less disrupted than the night before.

I hope you enjoy my second video diary below and don’t forget to subscribe and check out the playlist too for all of the videos!