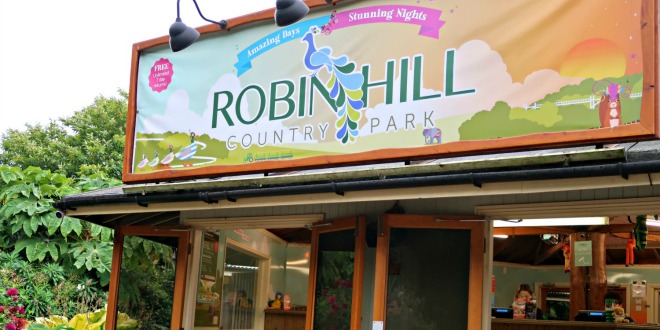 The weather was a little more gloomy on Thursday morning. The bright sunshine had disappeared behind clouds and the wind was back in full force. I popped on my ripped jeans and a coat and we headed off to Robin Hill Country Park. We hadn’t actually been to Robin Hill before and didn’t really know what to expect at all. It had been recommended many times but we never managed to go there last year. As you can see from the park map, Robin Hill is a blend of woodland walks and adventure play grounds. When we first arrived we headed straight for the Cows Express ride. This was a fun train ride for all the family. We was the only ones riding at the time and typically the girls wanted to go round twice. They had the cute cow statues around the tracks with funny puns for their names. We then made our way round the path towards the toboggan run. This was the one thing Hubby was really excited to take P2 on. Unfortunately, due to rain in the night it was closed until the track could dry. They told us it would be around 11am so we decided to hang around and play in the play ground areas. The girls seemed happy about the play areas. I was a miserable guts complaining about the colder weather. Eventually after about an hour the toboggan run opened. P2 was so excited. She went down with Hubby first and then I offered to go on it too. That girl is absolutely crazy. You are sat on a toboggan and you control the speed with the lever, I kept trying to pull it up to slow it down and P2 kept pushing it down to go faster. Honestly she loves a thrill. We then managed to persuade P1 to go on it and she loved it too. You have to pay extra for the toboggan which is slightly annoying when you pay so much to enter in the first place, but there is a Gold Pass option for unlimited rides. We then hopped aboard the land train to head round to the African area. This ultimately is a giant playground, there’s also toilets and refreshments available. There’s a lovely vibe to this area with African music and a large tent area. The girls loved the zip wires, climbing frames and especially enjoyed climbing on the big Rhino. There’s a lot of walking at Robin Hill so it’s great that there’s a land train to offer a little bit of a rest. You do have to fold pushchairs and the driver was extremely helpful. We were making our way around the map in an anticlockwise direction. The next big play area for us to explore was the Forest Play area. I thought this was such a cute play area using woodland animals as a basis. The girls loved climbing inside the Robin, exploring inside the spider and sliding down the bunny. The sun had started to shine much better too and so I started to feel much happier about our day. The girls, specifically P1, had started to complain of hunger so our visit inside Duck Down Village was definitely shorter than expected. I loved all the cute miniature homes that the girls could play in. They even found a school to role play inside too. We then headed for the Squirrel Cafe.

It was about 2 or 3pm by the time we got to the Squirrel Cafe for our lunch. The place was so incredibly busy that we had to sit outside which was absolutely fine as the sun was really warm now. We ordered some hot food and headed outside to wait. The food arrived and was presented well. The portion sizes for the kids was definitely much bigger than they maybe needed to be but it meant we could make sure they’d eaten more than they needed to fuel the rest of the day. After fighting off a wasp during our lunch, we headed over to the Treetop Trail where Hubby went up with all three girlies and I stayed with the pushchair. They were gone for ages and only P2, P3 and Hubby returned. We waited a few more minutes then started to worry about P1. She’s hypermobile and really struggles with strength and balance. It turned out that she’d got stuck and needed rescuing. Our next destination was definitely the brand new Squirrel Tower. This is a huge rope tower climbing to 8 metres tall. Once to the top you are on the Canopy Skywalk. Up there you can climb inside the spiralling mesh tubes that go underneath the skywalk. P2 being the girl she is, climbed straight inside with no fear whatsoever. I was in awe of that little four year old as she scrambled behind other children so high up! The only things left for us to do at Robin Hill was the suspended bridges and the Hill Billy slides. We had so much fun in these areas which are back near the Toboggan run. I think it was amazing to be walking level with the water and P3 even had fun wandering across the bridge. The girls really loved the slides too although definitely don’t ride on top of your coat, you will end up hurt! We took a stop off in the gift shop at Robin Hill. The girls were desperate for another Animotsu, I think they are called. They managed to persuade Hubby to part with some money and then we headed back to West Bay to regather ourselves for more fun. P1 had been booked in to a Trampoline lesson at the West Bay Country Club. P2 had asked to go too so was put on the waiting list. Thankfully not everybody turned up so both of the girls could join in with the lesson. The trampolines were the big “proper” ones and I could tell how excited P1 and P2 were about this.

They were shown how to do some simple moves on the trampolines. I found the instructors to be really friendly and helpful, encouraging both of them really well. Especially P1 who quite clearly has problems with her legs. I loved that they helped them to try front flips which you can see in the video below. Unfortunately I wasn’t able to watch all of their lessons due to P3 asking to use the toilet around four times in one hour. P3 began to get a little agitated watching her sisters so I rushed back to the house and grabbed our swimming gear. Hubby took P3 swimming whilst I waited for the trampoline lesson to finish. I then headed for the pool with the other two. It was already past bedtime but I actually didn’t mind. We hadn’t yet used the indoor pool so I was pretty excited about that. We changed in the female changing rooms this time and I was really shocked at the size of it. There was plenty of space to change, lockers to use, toilets and showers too. The pool was actually a little chilly so P3 got out a bit earlier with Hubby as her lips started to go blue. I stayed in with the other two. West Bay have swim noodles on the side to borrow so this meant the girls were able to show me their swimming skills freely. They loved it and it felt so lovely to be able to have time with them without P3 attached to me. After swimming we had some dinner back at the House Of Liz Earle and then headed for bed.

As always, here’s the video from our day which hopefully gives you a better feeling of the lovely day out we had at Robin Hill.