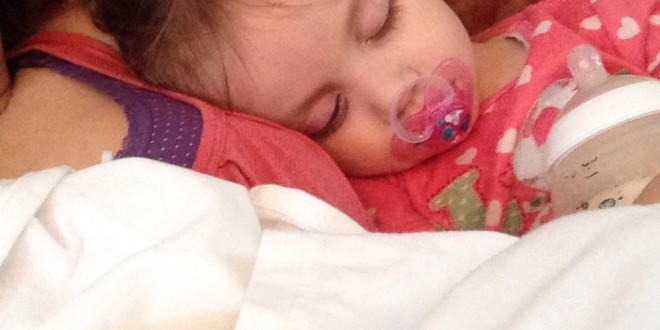 “It’s not just a phase anymore, it’s a habit”

There’s no doubt about it that I am sleep deprived. It’s the main focus of my blog posts at the moment and I apologise for that. The health visitor came last week to weigh and check up on P3, at the same time she asked questions about P2 and things about her development. The time before that she focused on P1. We discussed P2s sleep, eating, speech and her bowel movements at the moment.

Whenever I’m asked by anyone “How does P2 sleep?” I immediately laugh and respond with “she doesn’t”. It’s upsetting. The ‘temporary’ sleepless nights have lasted 21 months and counting, give or take about a two or three days where she’s slept through. Unfortunately, I can’t blame P2 because it’s completely our fault and I understand that now that P3 is here. It’s clear that I’m suffering from sleep deprivation. The signs are; extremely, tired, grumpy and snappy, clumsy, disorientated, emotional, stressed, having problems communicating, finding it hard to concentrate, less or more hungry than usual. I could tick all of those off to how I’m feeling right at this moment.

I can’t remember what I used to do with P1 prior to us moving into our flat when she was 10 months old. She finally had her own room, she was put to bed after having a story and given her milk in a bottle to settle herself. The door was closed ajar and I left her to cry. I never left her to cry for long because I didn’t need to, she’d be asleep within about 5-10 minutes. From that and as she grew older the routine adapted to being able to stay awake and play or read a book sometimes she’d have a DVD on until she fell asleep but the rule was that she had to stay in bed. It worked. She’s slept from 7pm – 7:30/8am since she was 10 months old.

It’s been different with P2. We’ve been too relaxed about things and just doing what makes our life easier. She was also breastfed to sleep and would always fall asleep on my boob. We co slept until she stopped breastfeeding at 6 months and then went to have formula milk feeds through the night and her dummy. Whenever she waked in the night I’d give her a bottle of milk and stay with her until she fell asleep. She wasn’t in my arms but I was practically hanging over and into the cot feeding her the milk.

When she moved from her cot to the mattress on the floor, I lay next to her and fed her milk whenever until she fell asleep and then sneak away. She wakes usually twice on a good night but it’s most often three or four times. It’s even more rare to just be once a night or not at all.

The health visitor explained that we need to get rid of the bottle, not just night time but all the time, even though P2 can happily drink from a cup. And for her dummy to be taken away as well. The HV did clearly say we shouldn’t do this until the New Year as there’s been a lot of change recently. There’s part of me that’s happy to wait, it’s not like when P2 wakes that I’m up for hours settling her, it’s a max of 15 minutes and usually just 5. But there’s that part of me that knows the HV is right and I know it will help and I’ll be kicking myself for not doing it sooner.

I’m scared that P3 is going to follow in P2s footsteps and be a bad sleeper too. The HV says that I’m doing things the correct way this time by not letting her fall asleep on my boob and having her sleep in the Moses basket during the day and in the SnuzPod at night, however, where she’s been constantly crying she’s naturally been constantly in my arms for the past week. That’s exhausting on its own! But it’s the only way we can get any peace.

I dread to think about the short and long term effects it’s having on my body. It feels like I’m barely functioning through every day. Exhausted by sitting doing nothing but cuddling a screaming baby and then being up half the night with baby and toddler. Hubby has been great with taking over some nights and I’ve been going to bed early to “catch up” but it’s just too much and something needs to give. Fast.

It’s not just a phase anymore, it’s a habit that only we can break. It’s just when…

Share
Previous A Third Child “Brings No Extra Joy” Is this true?
Next October Half Term 2014