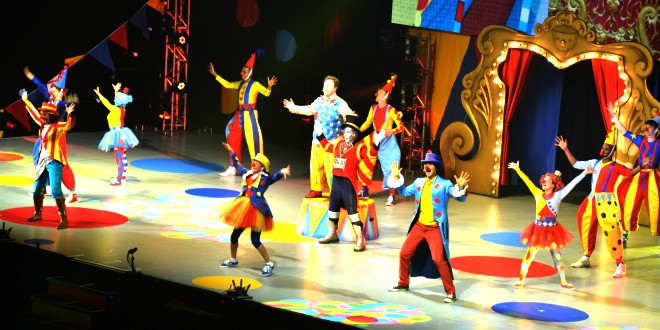 Yesterday, we gave P3 to my MiL and bundled the other two in the car for the hour and a half drive to Wembley. We were off to see CBeebies Live present Mr Tumble’s Circus. We’d discussed the show for a whole week and had really hyped it up, even in the car I was keeping them all excited so I really hoped it wouldn’t disappoint us like a different children’s programme had last year. The journey went really smooth and we parked well in the event car park, however we really should have prebooked as it cost us £20!! There was a slight queue to get into Wembley and once in our bags were checked (the security woman nearly stopped me because of my DSLR). There was quite a busy and cramped wait before they allowed everyone upstairs to be seated. I was also quite annoyed at the price of the merchandise and once again the kids went without.

Once seated, that was when all the fun began. The background music playing before the show began was all of Justin Fletcher singing well known songs. 5 minutes before the show began, well known Arthur Sleep and Gail Force gave a little prerecorded taster on the big screen to keep children amused and hype them for the show. I think this is such a fantastic idea for a children’s performance! Then Cat, Andy, Gem and Justin Fletcher joined Robert the Robot on stage ready for a super performance. I couldn’t believe just how much was going on. The whole time the audience were joining in and it was such a fun packed performance. The whole thing was well acted and there was only one slight slip up where a man dropped the juggling pin. Nothing detrimental.

The show followed the team completing Robert’s list of chores so that they could see Mr Tumble’s Circus. But Mr Tumble was running late due to traffic. The show frequently went from stage performance to the prerecorded showing on the screen as new stage equipment was set up. I really loved the way Justin involved the audience with dance moves and props. There was even a part where the audience had to push huge balloons towards the stage! I think that this photo explains the day perfectly. This was the moment that Mr Tumble came out for the first time, she was shouting “hug” over and over because when we’d dicussed that we were going to see Mr Tumble she had decided she was going to hug him. I felt quite emotional that she couldn’t meet him and hopefully one day we’ll get that opportunity before she outgrows him! We seriously had such an amazing time. I even think hubby enjoyed himself! When I asked P1 what she loved the most her reply was “Mr Tumble!”. I really think this says it all.

A brilliant and captivating family show for all ages. Very engaging and excellently performed.

User Rating: Be the first one !
Share
Previous Fun Spring Cleaning Facts With Spaceways
Next My Sunday Photo – Easter Sunday 05/04/2015