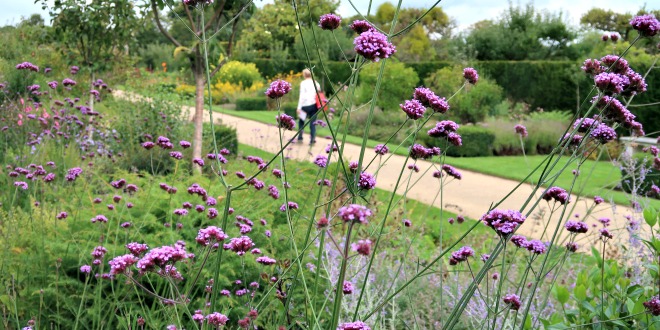 I felt a lot of guilt and a lot of excitement all at once about our visit to Penshurst Place for their last Summer Sunday event of the summer. We had decided to leave P3 with my MiL because she had spent the majority of the previous two weeks being super grumpy and we had all been craving some peace. It felt very weird though leaving one child behind on a family day out. We was greeted by a lovely lady at the entrance who explained where everything was and what times things opened. Despite opening at 10:30am, the house and activities that were on for the Summer Sunday didn’t really start until midday. We decided to head to the playground. Hubby and I had joked that we would be able to sit down as we didn’t need to be following the toddler around, but it was quite the opposite and we ended up playing with the girls one on one. The playground is brilliant at Penshurst with things for all ages to explore. We then took a slow walk up to the Garden Restaurant as Hubby was feeling hungry and P2 had expressed a need for food too. The Garden Restaurant supposedly opened at 10:30am but the staff inside seemed a little off and reluctant to serve us at 11am and so we decided to wander around the gardens and kill some time before having some food. The gardens are absolutely stunning. I could imagine children having an absolute blast in the olden days. The gardens are so well kept and must take a lot of time to manage. It’s all sectioned into areas, there’s water features, beautiful flowers and even a union jack flower bed too. The girls actually loved running around and exploring all the different passageways of hedges. The hour to kill went so quick. We then headed back to the Garden Restaurant where things had started to get busy. There was food on the counters and a queue forming. Hubby opted for a sandwich, then we got two jacket potatoes – one with chilli and cheese, the other with tuna and cheese. The girls shared the tuna jacket potato and Hubby and I shared the other. The prices were really decent and the food was delicious. It definitely filled us up to carry on our day.

After food we decided to explore the house. There is so much history to be learnt in there. Penshurst Place was originally owned by Sir John de Pulteney back in the 1300s! It was owned by a few people along the way including Henry VIII who passed it on to his son King Edward VI. I loved that King Edward VI wanted to reward the services of his tutor and steward of his household, Sir William Sidney. The house and estate was then handed down through the generations of the Sidney family and is still owned by one today.

In each room there are cards to explain what different things are and the girls actually seemed interested. As with all huge estate houses, I always wish we could see more of them like the bathrooms and play rooms and general normal rooms like that. But alas there are only a few rooms open to the public. After visiting the house we headed for the toy museum, P1 was really interested in here but P2 surprisingly didn’t take to it just as well and rushed around. The Coach House had some great activities on for the kids inside. There was a lovely selection of crafts to take part in and the girls chose to do the paper bag dogs. Hubby and I was able to sit for a bit whilst the girls coloured, then I decided to make P3 a Dear Zoo wheel thing so joined in with the colouring too. I loved watching Hubby get involved with the crafting as this sort of thing is usually my domain for the kids.

We had a slow wander back around the gardens and found the stage garden for some story telling. It was the Wind and The Willows. It had started to rain at this point but it didn’t seem to dampen our mood (pun intended). I loved how the actors didn’t let the rain ruin anything too and they were just so captivating and interesting. You even wander around a few areas of the garden with them as they tell the story. A great activity for children. All that was left for us to explore was the Maize Maze. Hubby had rushed back to the car for our rain coats and it felt a bit weird to not be bothered by the worsening weather. It didn’t phase any of us. We had so much fun in the maze. Hubby was so worried we would get lost. I loved the excitement and the girls really loved it too. It wasn’t really pushchair friendly as it was quite bumpy and P2 ended up walking the entire time anyway. We even got lost about three times and accidentally lost P1 for a brief moment too. Before going home we let the girls have a few more moments in the playground. We happened to bump in to one of P2s old preschool friends so that was a little emotional. The rain had got quite bad at this point and really there was only an hour or so until closing. I couldn’t quite believe we’d been there the entire day. There’s absolutely no signal at Penshurst Place so we were completely out of the loop with no technical distractions.

We needed the break from P3. I realised how much the other two definitely needed that space too and the attention. We had a truly lovely day and I can imagine the Halloween and Christmas events to be really brilliant at Penshurst. Here’s a video of our weekend and time at Penshurst Place!