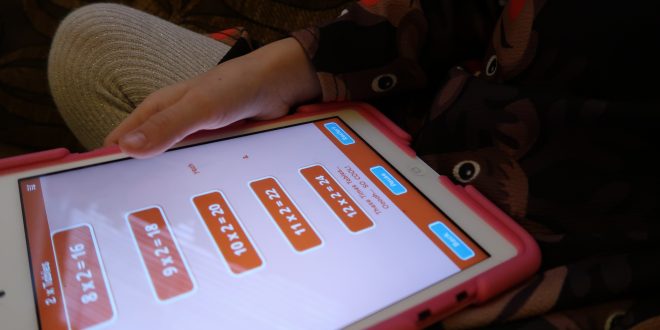 It has been a little over a month since we first downloaded the Maths Rockx app. The Maths Rockx app is owned and created by mum and dad team, Jo and Stu. It was designed to help children learn their times tables through fun, memorable songs. The app is available on both Android and Apple for £7.99 but there is the option to download the non-EDU version of the app for free and choose the times tables songs you need for just £0.79 per song. I was really interested to see if the app really did help with learning the times tables. We put in place a little routine where P1 would use the app for around 10 minutes before she was allowed to play other things on her iPad. She mainly would listen to the songs in the mornings. They are very catchy I have to admit and I am probably learning a few myself too. In the past few weeks I have heard P1 singing the songs to herself randomly too. We also had a parent’s consultation meeting recently where we were pleasantly surprised with her improvement across the board. Although she is still quite far behind, she is actually improving. Scientifically I can’t say that this is due to Maths Rockx but I do think it has really helped. It’s been a really fun way to learn and she is smiling when she uses the app so P1 obviously doesn’t think this is a chore. I am super pleased with her progress.

Maths Rockx is a brilliant app for children. It has large brightly coloured buttons which is super appealing. The 1-12 times tables are included in this app and each have their own separate well known song. In the quiz there are different difficulty levels too and I quite like that this can be changed to vary the learning and challenges. I honestly think it’s a brilliant app for children and we’ve seen some really positive results since downloading it.