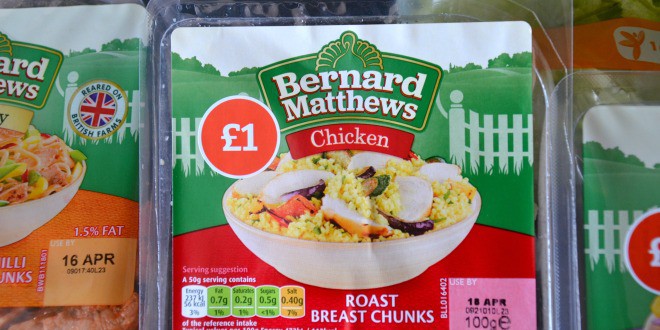 Meal times can be pretty boring. We all eat, three times a day or more. Children specifically get given their food laid out in front of them and they eat it, or throw it, mash it between their fingers, but usually they eat it. Then Bernard Matthews sent over their next Family Panel task and I was thrilled. Putting the kids in charge of lunch. Gulp! So I took P2 and P3 to the shops, I had tried to prize P1 away from the iPad but she was desperate to stay snuggled in bed with Hubby at 8:30 in the morning so that’s where I left her. I had an idea of what I wanted to let them create that would make it easy as P1 struggles with motor skills and P2 only being 2 years old.

We bought some sandwich thins, some lettuce, cheese, grapes, cucumber, mini cheddars and of course the Bernard Matthews Turkey Chunks. I also found a product I wasn’t aware of, Cheese Hamwich, in the frozen section.

I probably looked like an idiot but I thought that with the weather bright and warm we could have a picnic. So I set up the tripod, laid out the blanket and food ready for the children to get messy. Both P1 and P2 got stuck in. Literally stuck in with the butter. Huge great dollops. Its so easier to want to help when that’s what you are used to but I refrained and allowed them to do exactly what they wanted with their lunches.

I was actually so proud of them. Using the Bernard Matthews Turkey Chunks to create a lunch picnic for the children to make all by themselves was such a great idea and it was easy! It’s definitely something we need to do more often, trust in them to create their own meals and even have a picnic every now and then.