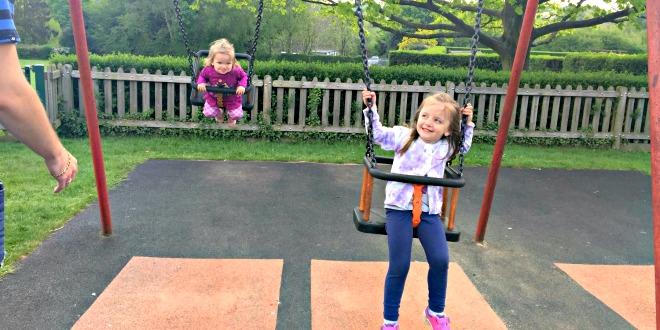 We have had so many opportunities for photos this week but I’ve picked this selection because I really think they sum up the week we’ve just had. This week has been so fun and I don’t think I’ve ever felt so content with life like I do right now. Ok, there’s been the low moments of arguing between my girls and behaviour problems with P1, but there’s an even bigger sense of happiness that’s filled my world this week. This post is sort of a bit like a diary for me to look back on so apologises if it’s not quite what I usually write.

I started our week with a trip to the local Nature Trail with some friends. I’ve never done anything like that before where you meet with a few mums for a play date outside of the groups or houses. It was really lovely and I just had P3 that morning so it was quite chilled. After the nursery pickup we had the dentist for all of us so had to pick P1 up early from school. After the dentist P1 also had Brownies.

On Tuesday we decided to try out a different park. Tuesday and Thursday’s are the days where P2 doesn’t have nursery so we always try to fill them with fun. Hubby had suggested we try out some local parks that we hadn’t been to before. It turns out we actually had been to this specific one but not since moving over here. We took P2s balance bike for some practice and had a lovely morning. After our park trip we went to McDonald’s for lunch. P2 and P3 had ice creams and chicken nuggets. We rarely go out for lunches and P2 kept saying thank you and that she was really enjoying her day. They smiled so much that day. On Wednesday the car had its MOT so hubby dropped the girls and me off at the duck pond before school. We took a leisurely walk round feeding the little ducklings and chatting. It was so lovely. By the time we got to the nursery to drop P2 off, it had started to rain so I made the spontaneous decision to try out the playgroup that is held in the same building. It was really refreshing to meet new people and watch P3 have loads of fun in a new environment. After nursery hubby treated us to another lunch out in the Sainsburys cafe where the girls shared a cookie and hubby and I had mega brunches. We had homemade soft tacos for dinner which we’ve never had before and they were really enjoyed by everyone.

Thursday was definitely our busiest day though. I did the usual getting ready in the morning for a playgroup, and headed out the house at 9:15. We then went the park for a bit afterwards, heading home for just 20 minutes for some lunch before going straight back out and heading to Tonbridge Park. We only recently found the park and it’s huge with a brilliant sandpit. We spent ages there with P2 doing her usual craziness of climbing everything that isn’t suitable for her age. We then popped to Sainsburys to buy a picnic lunch to have on the field at P1s school before pickup time. After school we headed home for about 20 minutes before heading back to the park for P2s Taekwondo lesson. Afterwards the girls enjoyed some time at the park before heading home for dinner at ours with my MiL. I help to run/promote (not really sure what my role is because I’m always late to help setup the toys) a playgroup on a Friday morning so P3 and I headed there in the morning. The numbers have been quite low recently so I’ve upped my game on the Facebook page to try to boost the attendance and I think it worked as this week we had double the amount we normally have. It’s previously been a bit like a VIP group for just my friends. It was lovely chatting to new people. P3 was totally exhausted after the playgroup so we headed on the nursery pickup a little earlier so she could sleep in the car. She was asleep within seconds. Hubby had decided to go on another hunt for a new park so I’d packed a picnic and asked the local Facebook group for recommendations. We found a lovely park and spent lots of time there in the really lovely warm sun. Then after the school run hubby picked P2, P3 and me up and we headed to the nature trail again.

That pretty much concludes our week. I honestly feel so drained and have spent most of the evenings with a headache and aching bones but at the same time I’m so happy and so in love with my little family. We’ve been embracing life properly for the first time. Taking every day as it comes and giving the girls a childhood full of memories. We are continuing our “park-crawl” for the foreseeable future which is exciting and the girls really exploring new places.

Have you had a busy week?

Here’s our little vlog from Tuesday: