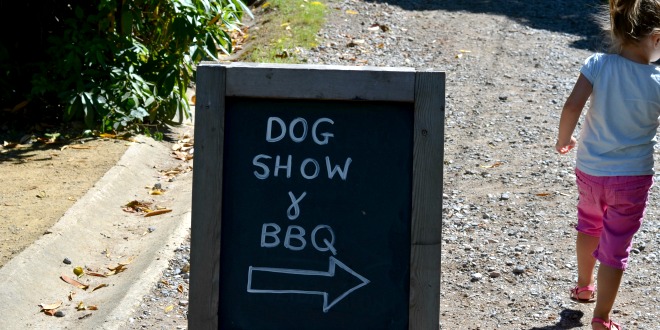 I just can’t believe how lucky we have been with the weather this summer. It’s allowed us to create so many memories as a family and we’ve visited places we’ve never been to before. Last Sunday the sun was shining brightly once again and the heat was incredible. We decided to head to the dog show at Riverhill Himalayan Gardens. P2 is absolutely obsessed with dogs. Sometimes she’ll disappear out of sight for a moment when we are at the park, and I know to look for a dog because she will be there asking the owner if it’s ok to stroke. Seeing there was a dog show in a place we love to visit was super exciting. P2s face was an absolute picture when she saw the sheer quantity of dogs all in one place. She was going along to each one asking to stroke them. She especially loved a Beagle puppy and a very bouncy Dalmatian. It was set in a field with little stalls that were supporting the show and prizes. We only managed to watch one of the classes which was “the dog with the waggiest tail” before we headed off to explore the rest of Riverhill in search of some shade.

I created a little weekend vlog for the first time in a little while. We had a pretty eventful weekend in the end. It was the first one back since having everybody back in a normal routine. It was nice to spend time together. What did you last weekend?
Share
Previous Siblings 2016 – September
Next Visiting Ightham Mote – National Trust