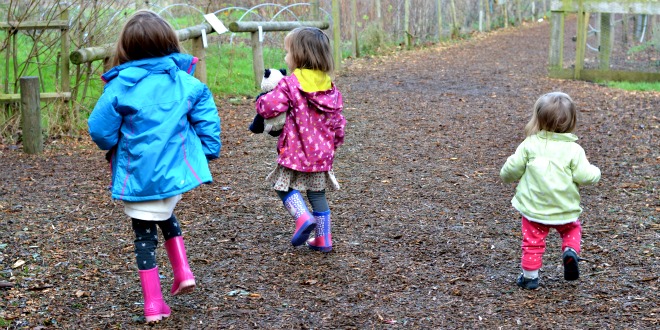 “It was lovely to have all three running about together”

Around Easter time each year since moving to Sevenoaks, we have been gifted a membership to the local Nature Trail by my MiL. I think originally it was my MiLs way of getting us to go out more because I was a little reluctant during the first 6 months of living here and was happy to spend day in day out in my pjs at home. If you follow my social media accounts then you’ll be more than aware that we head to the Nature Trail very often now. It’s attached to a garden centre and at the moment we don’t actually have a garden so we just walk straight through. It’s quite an expensive garden centre which has a little cafe too. I’m sure one day we’ll appreciate that part a bit more. We sometimes go a long time between visits but recently, even though the weather is cooler, we’ve been going quite frequently. Usually it’s just with P2 and P3 but recently we’ve been taking advantage of some one to one time with P3. She’s finding things such an adventure now that she is confident on her feet. It’s so lovely to watch her face as she listens to the world around her or feels new textures below her. I think one of the things that attracts us so much about the Nature Trail is the fact there are pigs, ducks, chickens, goats and even some wallabies to see on your way round. Dogs aren’t allowed in there which means you are pretty safe from treading in dog mess. It’s peaceful and a really pretty walk. The girls, even P3 now, manage to walk the whole trail as it’s a perfect size for a little adventure. We’ve been getting a bit of cabin fever since Christmas as Hubby has been quite poorly, the girls have had coughs and runny noses and quite frankly I’ve been quite content with hibernating in my pjs watching film after film. But enough was enough on Monday. Hubby suggested we go to the Nature Trail as it’s only a short drive away and the girls could let off some steam in a safe environment whilst opening their lungs to some fresh air. It was lovely to have all three running about together and I’m so glad that I took my big camera with us. I was given a new lens for Christmas and I am totally in love with it and it was nice to get some practice. On a whole we live in such a pretty area with so much countryside around us. I feel so lucky and looking back on the photos from our little adventure reminds me of this. My girls are growing up in such a lovely place. The two photos below were taken just 10 months apart and I think I’m going to take a photo like this every year. The Nature Trail is my happy place I think. It seems to always lift my mood. It also has a pretty amazing Santa’s Grotto at Christmas too. Do you have a happy place?