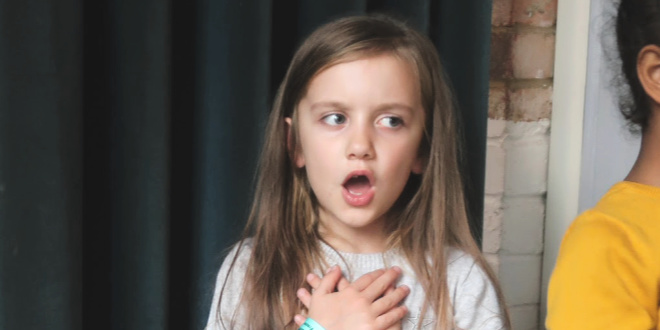 I am not ashamed to admit that we named our third daughter after the Disney Frozen princess, Elsa. Although I’m not entirely sure what we’ve created because she now refers to all tops and songs featuring Elsa, as her songs or tops. “Why are they dressed up like me, Mummy?” Ooops.

Anyway, we had all been pretty excited for the release of the new Frozen 2 movie. It was inputted to our diaries as soon as the release date was released. I’m a die-hard Frozen fan, can you tell? Not long before the movie was released to cinemas we had a very exciting email from the team at Make Believe inviting us to come along for some Frozen fun in London, the day after the movie hits the big screens.

I couldn’t say no, so off we went on Saturday with three excited girls by train to London.

My three girls always find going to London by train such an adventure. This time a kind gentleman offered up his seat for them so it was a much more comfortable ride. I have a little fear of the underground, so we avoid it where we can and thankfully this journey gave us the opportunity to walk through London to Picaddily Picturehouse Central.

Walking through London is busy of course, especially on a Saturday, but it’s also fascinating for the girls. We got to walk through Trafalgar Square and see protestors, the Christmas lights were all up too and even exposing them to the bad parts like homelessness ignites conversations. It was an interesting journey. It became very obvious we had arrived in the right location as we followed little boys and girls dressed up as Anna, Elsa and even Olaf into the Picturehouse Central.

For those who haven’t heard of Make Believe, it is a children’s performing arts school. They teach singing, acting and dancing to children aged three to 18 years. We have a school local to us which Eva has trialled a few years ago so I was really excited to see if her passion for performing arts was still there.

We met the team hosting the event, the girls were each given a goodie bag and then we got shown to the bar area at the Picturehouse Central. My family is notorious for being early and this was no different. We got comfy in a seating area, blew some of the gifted bubbles and ate a few snacks ahead of the fun. The event kick-started with a red carpet experience. I’m sure the stars of Frozen would have had similar. We couldn’t persuade Elsa onto the carpet for a photo but captured these two. It was nice to see Freya joining in as she likes to pretend she isn’t into Frozen anymore because she’s too grown-up… No one is too grown-up for Frozen!

We had special access as we had been invited to work with Make Believe, however, the rest of the guests said goodbye to their children at this point and the children gathered into a little room ready for a Frozen workshop with one of the Make Believe coaches.

There was about 60 children in the room, I’m going to take a guess that most were somewhere between the ages of 3 years and 12 years. I loved seeing both boys and girls in there proving that Frozen isn’t just for girls. They started off with a voice warm-up, then progressed into learning the lyrics with actions to the well known Frozen theme songs. You can see it more clearly in the video that I created further down in this post. You’ll be singing along by the end of it!

I think the confined area made Elsa and Freya feel a bit uncomfortable. Freya sat there doing nothing, Elsa became quite irritable and needed her ear defenders. Eva was the only one of my three to join in even slightly but by the end of it she was singing her heart out too. You can’t get away from some Disney magic.

Everyone in that room was singing, the kids were all really happy and clearly having fun. Let’s take a quick moment to appreciate how stressed my husband looks. The girls were pretty draining and I definitely think they would have had more fun if we hadn’t been there!

We then made our way into the cinema screens. Make Believe had booked an entire screen for the movie. I was a bit worried about watching a film with 6o unaccompanied children, but it wasn’t too bad actually.

Frozen 2 did not disappoint. I won’t give you any spoilers if you haven’t seen it yet, which you should, but it was truly magical. It has a brilliant storyline and there’s many, many points that make you laugh and cry. Olaf is just awesome! You’ll enjoy it however old or young you are. Elsa had seemingly begun to feel poorly by the end of the event. Which would probably account for her irritability. She actually had come down with something and then spent a few days off school.

We all made our way back to the train station for the journey home. I think Eva would like to join Make Believe which is very exciting for her, she may be on a stage near you in the future! I hope you’ve enjoyed this post and have fun watching our video.