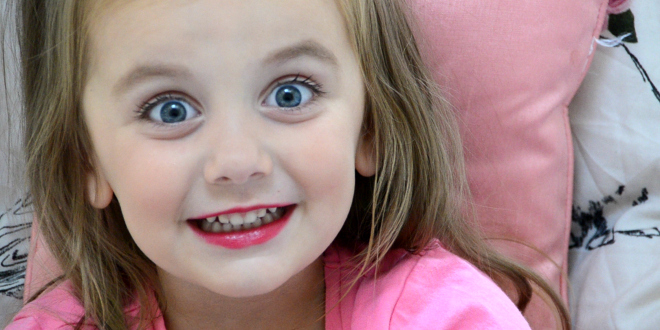 There’s no hiding from the fact my Hubby is extremely outnumbered. He’s even begun to pick pink or girly things from shops over a more masculine version. Like pink shower gel instead of a green or blue for example.

I love that I have daughters. I have visions of shopping, spa days and afternoon teas when they are older. I hope that our bonds will be very close. I often get little glimpses of their teen and adult years. P2 especially loves to watch me put my makeup on and frequently asks for lipstick too. Which most of the time I do allow a natural colour.

The other day she specifically asked to have her whole face done. I put it off a little bit because I don’t like the idea of putting lots of product on her perfect skin. But then one afternoon after having nursery followed by a play date, I caught her falling to sleep on the sofa. I needed to distract her and so I offered to do her makeup.

She was so excited. She actually asked me to film her so that I could make a video, which of course I obliged to. Here it is:

Now I am definitely not condoning makeup on little girls. There’s is absolutely no way I’d let her go out in public like that. But I don’t see any harm in her experimenting whilst we are at home. She loves it and she loves everything girly. Make sure you subscribe to my YouTube channel as P1 has requested I film her having her makeup done too.
Share
Previous Lalaloopsy Babies Potty Surprise Doll Review
Next Making Gingerbread Biscuits Using The Real Baking Cookie Kit