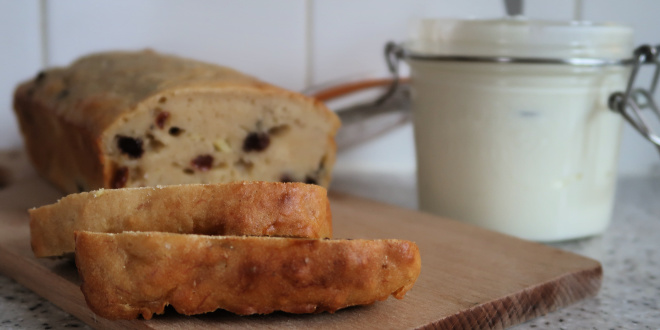 Making My Own Yoghurt

Full transparency, I am not a fresh yogurt eater and the only time we have yogurt in the fridge is when we need it for baking. I was very interested to be offered the chance to review the EasiYo Yogurt Maker. 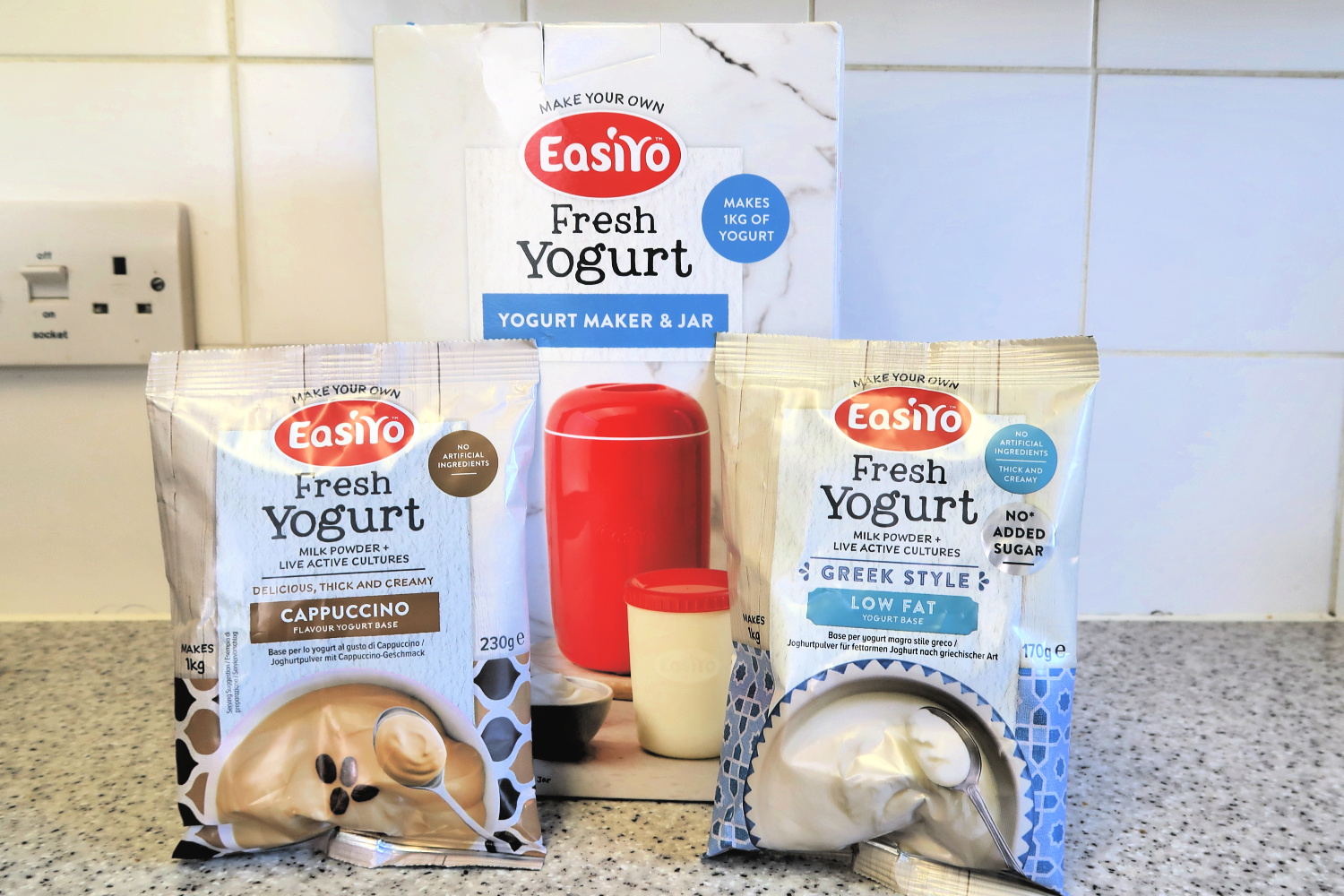 Fun fact, the EasiYo Yogurt Maker was launched in September 1992, my birthday month and year! I found that pretty cool.  The maker is ultimately a giant thermos flask that keeps the inside warm to activate the lactic cultures in the EasiYo Yogurt Mix Sachet.

The EasiYo Yogurt Maker was designed to enable you and your family to have as much fresh yogurt as you like. This one that I was sent makes 1kg of yogurt, there is a smaller 500g version too which I do have my eye on (it’s pink!) 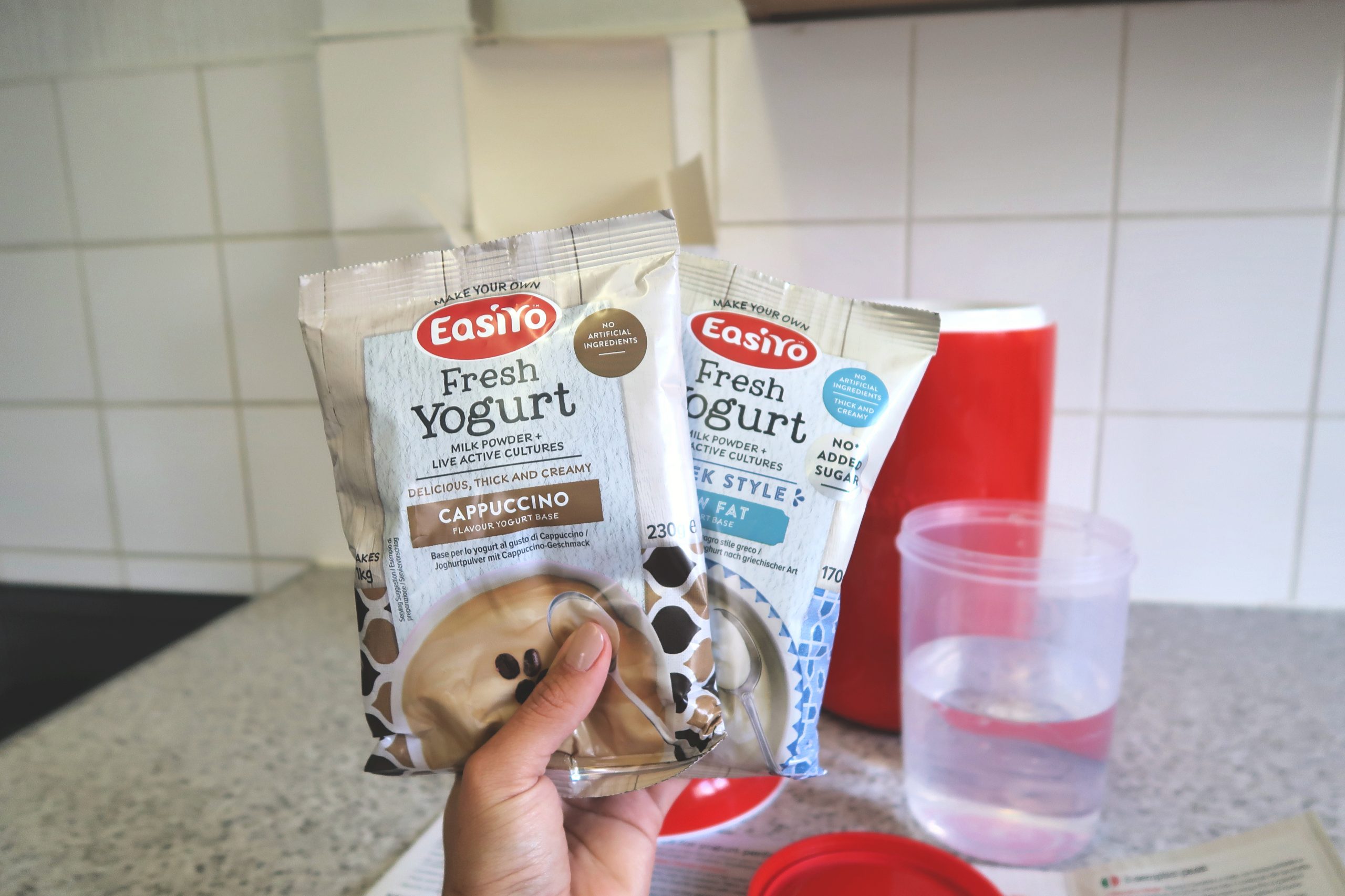 The EasiYo Yogurt Maker Sachets have no artificial ingredients, are nutritious, gluten-free and suitable for vegetarians! I was excited to see how this yogurt maker worked and whether it was easy. I truly didn’t expect anything great if I’m honest.

Thankfully the instructions are included and very easy to follow. It’s worth noting that the sachets also have instructions on the back of them which are very useful if you misplace or recycle the packaging. I’m quite guilty of doing that in my attempt to supposedly declutter.

The EasiYo Yogurt Maker comes with two parts. The main large red yogurt maker and what they call a jar. Inside the yogurt maker, there’s a removable red marker that you place the jar on. 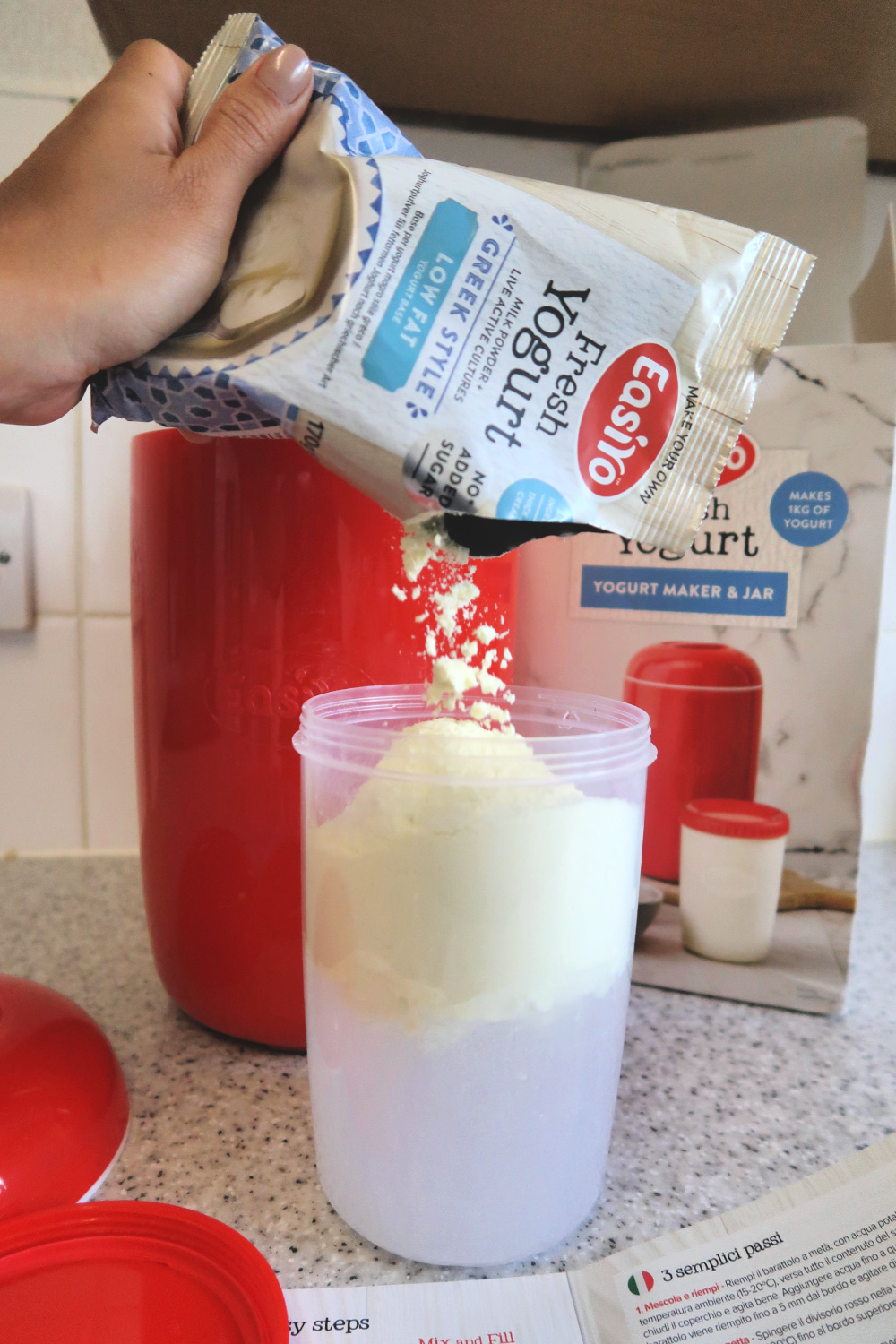 There are so many flavours to pick from, anything from everyday yogurt to some more exotic and fancy flavours. I tried out the Greek Style Yogurt first as I had a couple of recipes to use it in.

There’s a hand half way marker on the jar itself so there’s no need to measure. After filling half of the jar, add in the sachet and give it a big shake. Despite screwing the lid on tightly, I ended up getting droplets of yogurt mixture splattered all over me as I shook the jar. I couldn’t figure out why because it wasn’t leaking, it was very odd! 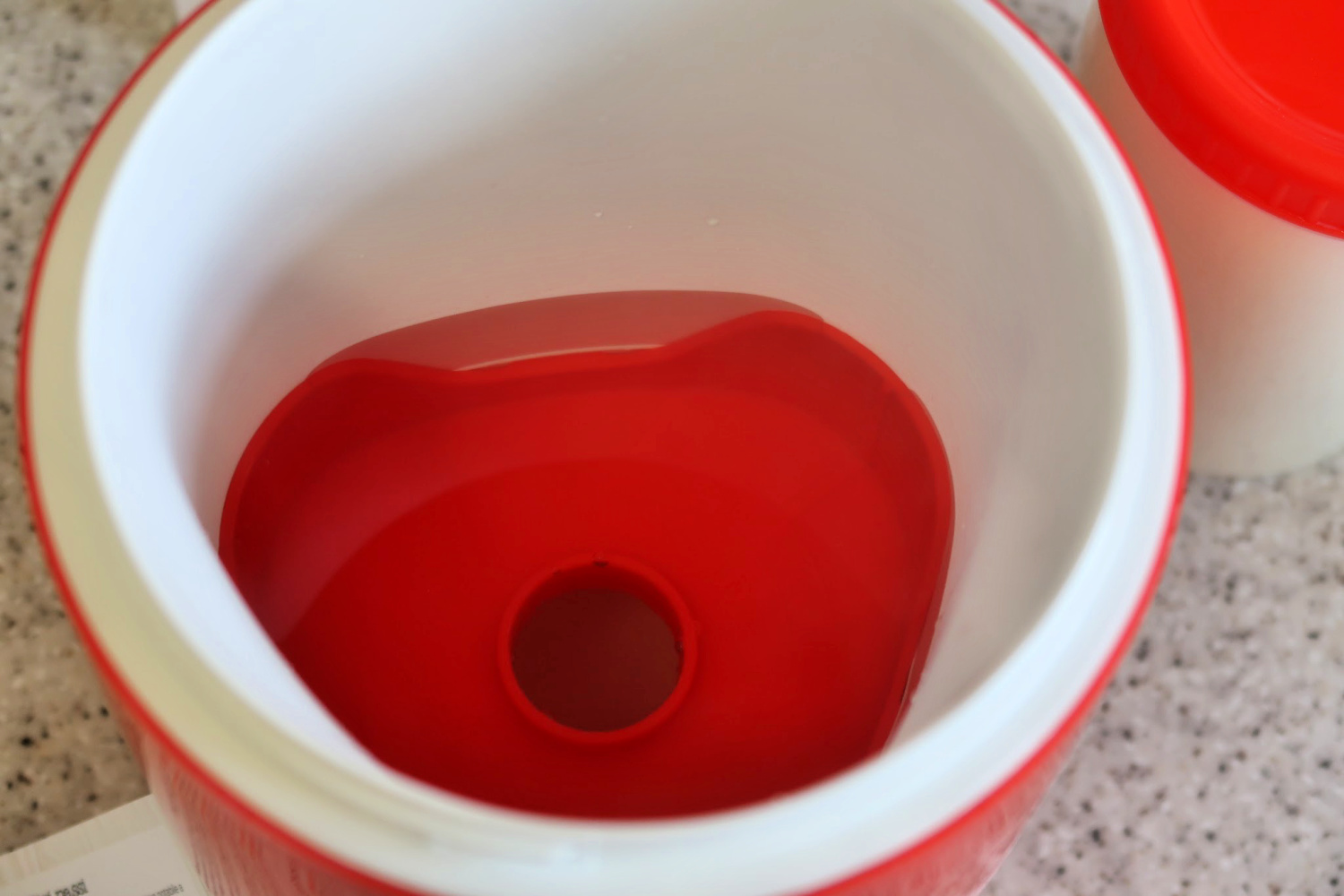 The next thing to do is fill the jar to near the top with more room temperature water/lukewarm water. It needs to be filled to about 5mm from the top.

You then have to fill the Yogurt Maker with boiling water. I made the mistake of not securing the red marker to start with, so it floated upwards as I poured the boiling water in. It needs to be filled to just above the red of the marker, the red curved bits that go up the sides. Sorry that’s not written very English is it!

The final step is to place the jar inside the maker and screw the top back on. I was initially concerned that you have to leave the EasiYo Yogurt Maker for 8-well up to 24 hours until the yogurt has set. I had all sorts of food poisoning visions going through my mind. But it’s all to do with the lactic cultures and creating the yogurt. Very clever!

I made our yogurt in the evening, as I was cooking our dinner. It took about five minutes to prepare and then I left it on our kitchen side overnight. 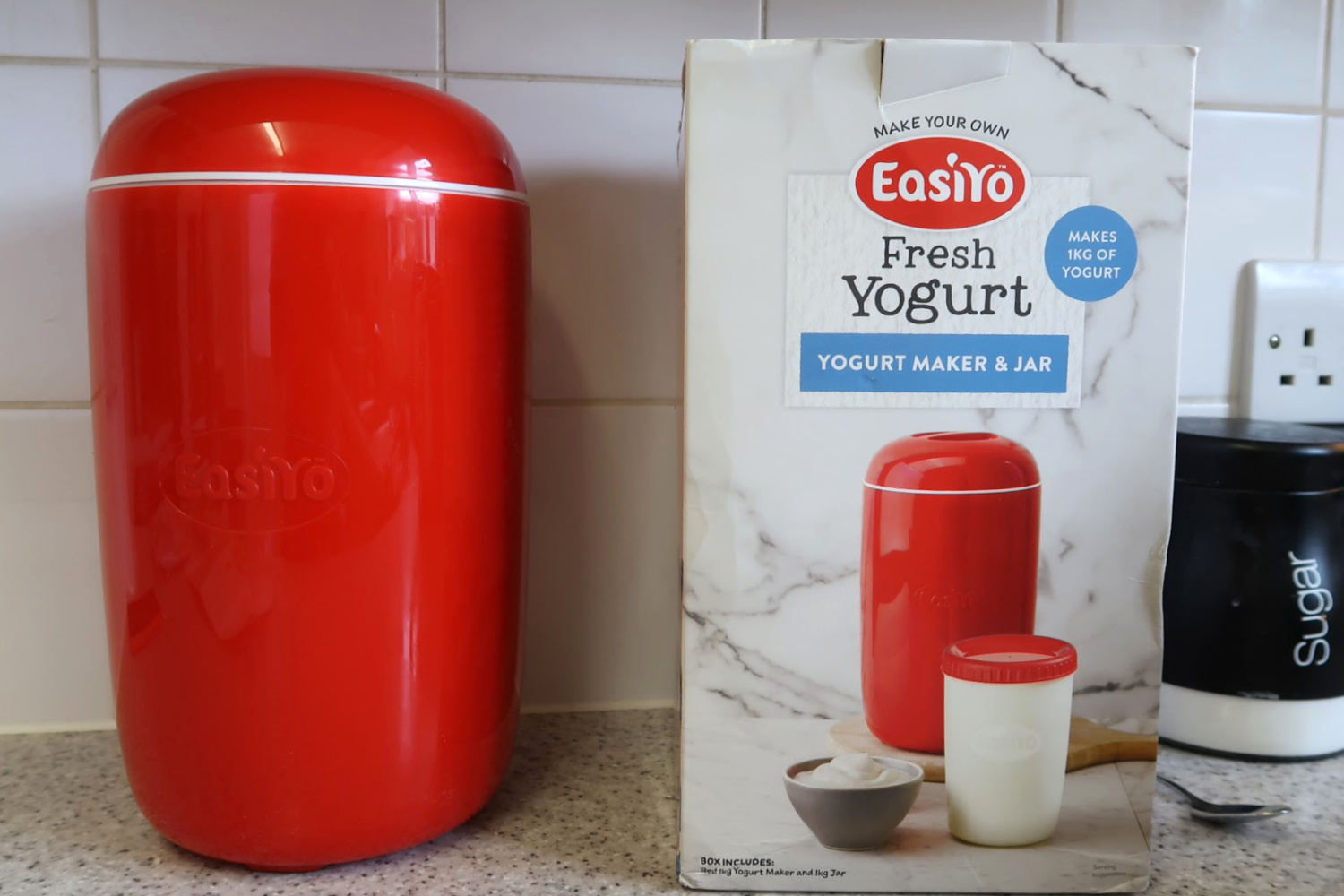 In the morning, I was nervous opening up the maker and removing the jar. It was exciting to see that the yogurt had set but was a teeny bit lumpy. I’m not very at peace with yogurt but I gave it a good stir which helped to smoothen out the consistency.

The last thing to do is to pop the yogurt jar into the fridge to chill. Once the yogurt is made and chilled, it’ll last for two weeks in your fridge. I didn’t realise this until the evening after making the yogurt. I’d spent the day a bit overwhelmed at 1kg of yogurt in my fridge!

The yogurt tasted lovely considering I am not a fan! I decided to use a lot of the yogurt in some baking. The go-to bake that I know includes Greek Style Yogurt is a loaf of banana bread. I ended up making a double batch. I also made chocolate brownies with it too which was an odd concept. 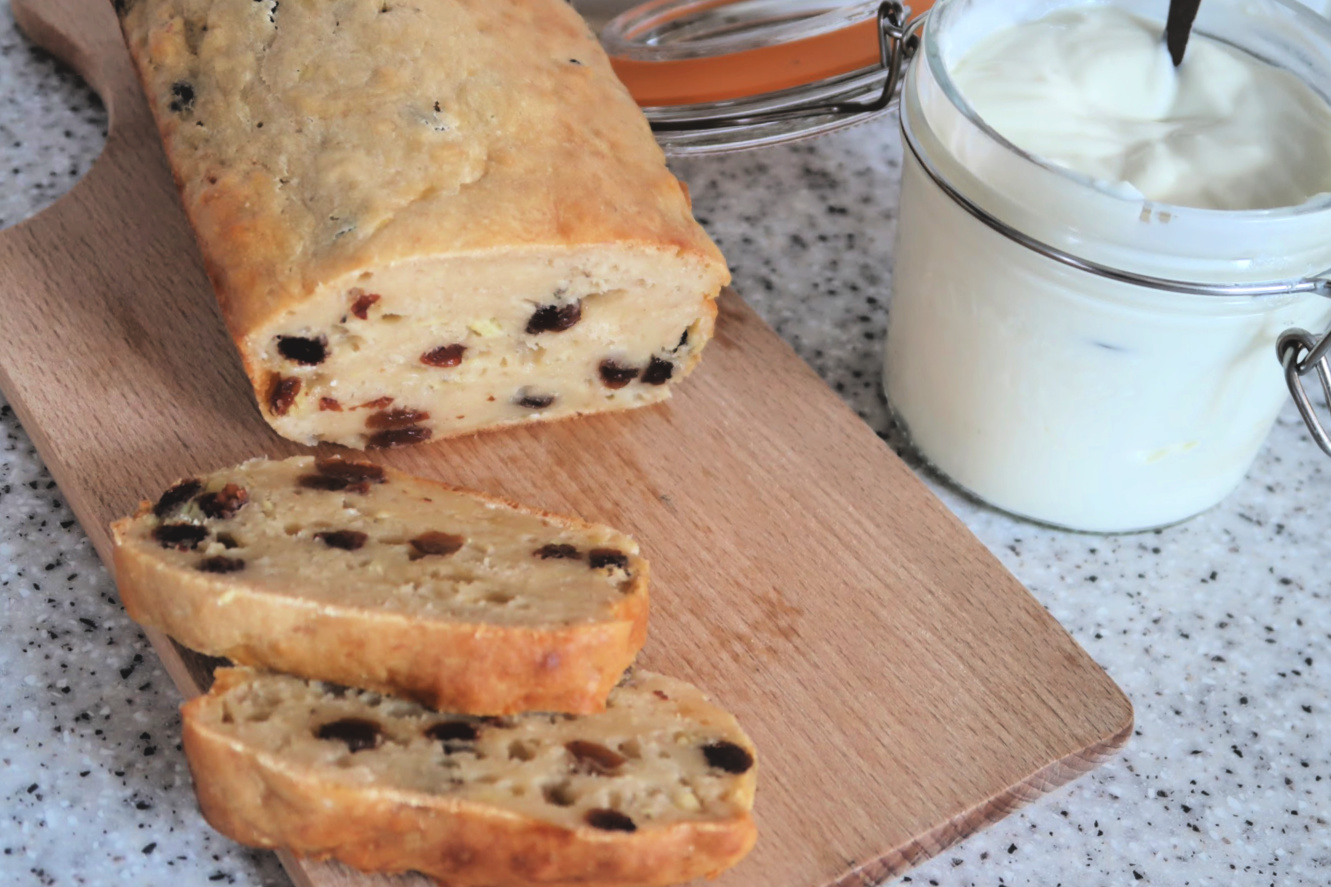 Overall, I am pretty impressed with the EasiYo Yogurt Maker. It is a little large and I’m struggling to find a home for it in my kitchen, but it is simple to use and the idea that you can make a bulk amount of yogurt that will last two weeks is amazing.

The EasiYo Yogurt Maker costs £16.75. You can buy a starter kit that includes some sachets which work out great value. The sachets themselves cost just under £3. I initially thought that was super expensive, but after realising the yogurt lasts for two weeks the cost is cheaper than buying premade yogurt in the supermarket.