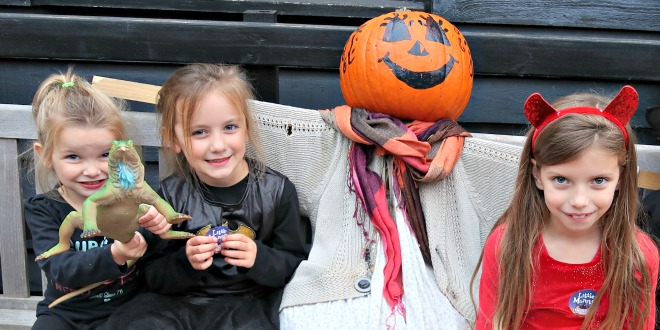 You all know that we are huge lovers of Marsh Farm. Two of the girls are the face of their Christmas advertising this year! We tend to visit during their special events, Easter and Christmas being the main ones. This year we also went to the Dinosaur Dig in September. During the October half term they had the Marsh Farm Halloween Festival and I was very excited to experience it for the first time.

Here’s the video from our day out which I hope you’ll stop to watch. It gives a much better feel for the event, immersing you in the action. We were first to arrive in the car park and for the first time we were greeted by parking attendants. I assumed they were expecting a large amount of guests, and they happened to be correct.

We invited my mother-in-law, her partner and my Brother-in-law to come for the day out too so despite being first we waited for them to arrive before entering.

I love themed events at Marsh Farm. I love the energy and enthusiasm that goes in to decorating the animal park, putting on shows and giving everybody the best time.

The Halloween Festival definitely didn’t disappoint. The entire place was decorated with pumpkins, bunting, cob webs and skeletons. It was brilliant!

Marsh Farm always have something going on even on a normal day, but during events the schedule is increased with themed activities and shows. Most of the activities start at 10:30am, giving you half an hour to explore and go to the toilet when you arrive at 10am for opening.

First on our agenda was getting to meet Frankenstein. I’d actually ticked off the things we hoped to see so we didn’t miss the important Halloween fun. The meet and greet was a simple one. They gave Frankenstein a high five and posed for photos. He was really cute though and I was quite impressed with the costume. There was a short little interval between the first session and second so the kids were able to play on the tractors. Everything you do at Marsh Farm (except food for yourself) is included within the entrance fee. Even the food to feed the animals at certain times, the tractors and the funfair rides. There’s no hidden costs which is amazing!

Our next activity to tick off our list was the Monster Mash Disco. The theatre was absolutely packed and our visit on the Thursday was definitely the busiest I’ve seen Marsh Farm. Although it was busy, it wasn’t so busy that we felt stressed out or claustrophobic.

The Monster Mash Disco was led by two witches, Petra the Pumpkin (Halloween outfit goals) and Frankenstein himself. The lights went off and it felt very Disco like. They danced to a few halloween/monster songs. Only P1 joined in with the other children as I think P2, P3 and my Brother-in-law were a little overwhelmed. It was a lovely show but I think it needed a little more energy.

Next on our list was definitely to go and see Cello The Wizard. The man underneath the costume is a great children’s entertainer who we always get excited to meet for the events. We sadly missed him over the summer but saw him as Terry the Dinosaur man in September. Honestly, he makes the themed events so much fun! We watched the little magic show with Cello the Wizard by the giant pumpkin that you can have photos inside. It was a great show with lots of energy and action. The girls were laughing their heads off.

The events took us up to lunchtime. The girls had started to whinge about hunger obviously and we happened to be right outside the indoor play centre. It was absolutely packed so we decided to eat the packed lunch my mother-in-law kindly packed, outside by the jumping pillows. I’m going to talk about the weather because I am British. It was so sunny albeit cold but the girls had removed their jackets and were ready to play in the sand. This little area is perfect for picnics as the girls can play in the sand, jump on the pillows and be supervised from afar by the adults.

My mother-in-law kindly packed enough food for everyone which consisted of croissants filled with either chocolate, jam or cheese & ham. We had sausage rolls, crisps and chocolate! I was actually quite surprised at how well the girls ate. After what felt like a very long time of chilling out by the jumping pillows, we made our way back round to tick more fun off of our itinerary. The Magic Show was next on our list. As we walked towards the theatre the queue was huge and I was worried we wouldn’t all get in.

Thankfully we managed to squeeze in. Bam Bam is definitely the girls favourite part about going to Marsh Farm. He’s always there I believe and actually does the same show each time we’ve seen him, but the girls don’t care. They laugh more each time. I mean look at P3’s happy face! Bam Bam’s jokes and magic are silly which is what makes it all hilarious and perfect for all ages.

We then decided to venture to the pumpkin patch despite visiting one locally and already having more than enough pumpkins at home. Marsh Farm were regulating it with the wristbands, squiggling off that you’d already picked one. They were allowing one per child. I thought that was great actually.

The girls raced round trying to find the perfect one to take home. Thankfully they were all quite small round pumpkins. I took a few photos and then we headed to the barn for carving. Not going to lie, I was quite excited about the carving taking place at Marsh Farm. It meant we could practice without causing a load of mess at home. The staff were there on hand to chop the lids open and offer supporting for a design.

The girls loved doing the carving each of them taking time to create their perfect lanterns. P3 obviously needed assistance but weirdly not a lot. She managed to carve by herself. You have the opportunity to leave the pumpkins there with a name tag to collect later, however Hubby took ours straight to the car so we wouldn’t forget. Whilst Hubby was transporting the pumpkins to the car, we took the kids to play in the outdoor play area and have some fun on the funfair rides. There’s two funfair rides; a carousel and spinning teacups. I adore this photo I captured of my girls fist pumping when they agreed to spin the teacups. We did actually witness a slight incident in the playground, not Marsh Farm’s fault at all, and purely a very silly parent completely in supervising their young child. However, the staff were so quick to get this situation resolved and I was in absolutely awe at their professionalism. I wasn’t going to mention it but felt I really needed to.

The staff at Marsh Farm always go above and beyond to create a fun and safe environment for any trip, and watching them react and work as a team to resolve a crisis was incredible. Just incredible and my hats go off to you. Also, always supervise your children parents!!!! After a rather long visit in the outdoor playground, we managed to make our way round to Boo Barn. A new addition to the Halloween Festival this year. We’d actually missed it whilst it was open, by ten minutes, but as I’m one of their resident bloggers they kindly took us through privately. The witches who are usually in there had already left.

It’s a barn that is very dark, there are rooms inside that are decorated spooky. It was great fun seeing different rooms of a home totally transformed. The girls loved it. Right at the end they were given sweets by knocking on the trick or treat door. Definitely a must to visit whilst at the Halloween Festival in Marsh Farm. Everything had started to slow down. The activities were all finished as it was now 4:30pm. We had promised the kids a play in the indoor play area which had now calmed down from guests. Us adults got to sit down for a few moments whilst the kids played.

P3 then started to get quite emotional as tiredness kicked in. It had been a long day of constant fun and activity. We’d had such a brilliant day so decided to end on a good note rather than waiting for everybody to start arguing from tiredness.

We made our way to the exit at just gone 5pm, closing time. We hadn’t managed to fit in the Witches Maze which is near the jumping pillows, or done the crazy golf (also included in entrance price) and we didn’t even get to play on the play area right near the exit/entrance. We’d been totally occupied all day by Halloween fun.

There was however just enough time to pose next to the pumpkin scarecrow. A great way to finish our day!

The Halloween Festival is on until 28th October. If you are local, please make a visit. If not the next event at Marsh Farm is their big Christmas event and we love that one!!