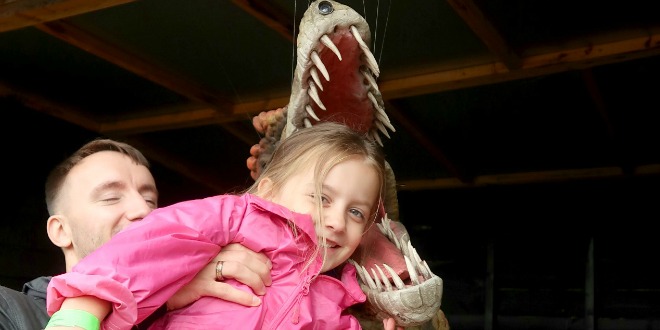 Every weekend in September Marsh Farm are hosting the Dinosaur Dig event. It’s promised to be full of dinosaur themed fun. As I am sure you are aware we work regularly with Marsh Farm. It is really special to me as Marsh Farm was heavily in my childhood so it’s great to help them promote, however all opinions are of my own as always. We took my Mum and my Grandad along for the opening day. This post is all about our time there. First of all, Marsh Farm is over in Essex in South Wooden Ferrers. It takes us about an hour to get to now that we live in Kent but it is totally worth the travel. We arrived for opening time, 10am every day, and we were actually the first in the queue. On the way there it had rained but thankfully it stopped once we had arrived.

On a themed event day the activities at Marsh Farm are non stop fun. I took a photo (above) of the Dinosaur Dig activities for the September weekends. As you can see there’s fun the entire day and you can plan your visit to keep the kids entertained. The Jurassic Egg Hatching was top of the list to see as we were quite early we decided to take a little wander around some of the animals. Marsh Farm used to be very farm animal heavy and this reduced significantly but there’s still enough for children to get close to. The girls loved the goats especially as they really enjoyed a stroke.

We then popped round to the mini tractor rides. The farm was very empty at this point so the girls could happily ride around the track without worrying about sharing. Marsh Farm offer this free to experience as part of the entrance cost. At half past ten we headed for the egg hatching with Sir Terry Dactile. This guy (the actor behind the characters) is honestly a credit to Marsh Farm. He’s so hilarious and puts so much effort in every character he portrays. We’ve seen him at Christmas, Easter and now as a Dinosaur explorer. The girls got to watch a dinosaur hatch and learn more facts about dinosaur eggs. The girls loved it although P3 who adores dinosaurs wouldn’t touch it. As a continuation to the dinosaur theme, Marsh Farm have put together a Dino Trail as part of the Dinosaur Dig event. A great way to learn some of the dinosaur names as you wander around the farm. If you complete it they give you a sticker when you exit. The girls were a little side tracked so completely forgot to complete there’s sadly.

Straight after the Jurassic Egg Hatching we headed to meet Tiny The Triceratops. I think all three of the girls were in complete awe of this giant dino. The lovely Jazz told us all about Tiny, what he eats and where he was found. It was a lovely way to get the children involved. They then had the opportunity for a photo. Once again P3 was too nervous to go close despite loving see it. We were all getting rather hungry by this point and judging by previous Marsh Farm visits, it’s good to get in the restaurant/soft play early as it gets busy! We were actually the only ones in there for a little while and it soon got busy. The girls went off to play in the soft play whilst us adults negotiated the menu and placed our order.

I actually think the food is ok priced for what is served and it’s actually really delicious. The kids meal wasn’t over portioned either which is always a bonus as I hate seeing leftover food. We spent a good bit of time in the soft play before heading for the magic show. We then had to see the Magic & Mayhem Show with BamBam. After attending his show in the holidays and loved it. It’s just absolutely full of fun and laughter. Hubby got involved last time and then this time P2 was picked to join in. You can see her take part in the video I filmed from our day below. She did a great job but obviously I’m bias!

There was a quick ten minute gap between the magic show and the Diddy Dino Puppet Show. The girls quickly hopped on the carousel. There are two rides at Marsh Farm which are included in your entrance price, however they are only open for a set amount of time during the day. There’s the Carousel and the Tea Cups. After a quick ride we took our seats back in the theatre for the dino puppet show.

We all really enjoyed the Diddy Dino Puppet Show. The staff got all of the audience involved as they wandered around allowing us to stroke the baby dinosaurs and also dance to various songs. It was great fun and you can see my Mum dancing in the video too, hilarious! Also during September Marsh Farm have the Potato Patch open. It’s essentially a potato field where you can pick your own potatoes and take them home. All for free. My Grandad was absolutely in his element helping P2 to dig up potatoes of her own. P1 spent a lot of time and focus with my Mum digging potatoes and P3 really just enjoyed digging! We have enough potatoes that we can turn into roasties and mash in the next coming weeks.

Another great facility included in the price of admission is the tractor ride. Again they have set times and I suddenly realised the first one was due to start as the girls were playing. So I raced over to get in the queue. It’s a short little ride across the marshes, I remember when you used to see cows and sheep in the fields but as the animals have reduced significantly the views are more of the scenery. It’s still a lovely ride and at parts a little bumpy which adds to the excitement. My Mum had to sadly leave us at this point as she needed to get to a friend’s Baby Shower. My Grandad was keen for the girls to walk an Alpaca so we headed over there. The poor Alpacas did not seem happy but the girls enjoyed the quick walk around the enclosure any way. I do love that they are still able to get close to all the animals with different feeding activities on during the day. We then took the girls to the jumping pillows and were really thrilled to see the play beach was still there from the summer holidays, although the water wasn’t in action, the girls could still make sandcastles and jump on the pillows. In fact they were so occupied and happy I was actually able to hold a proper adult conversation with my Grandad and catch up on lots of different things.

We ended our long tiring dino day in the play area nearest to the entrance. Hubby took P2 to play Crazy Golf (it’s the best one I’ve seen at a family attraction) whilst my Grandad helped P1 and P3 to hunt for gems and fossils in the sand. They all then had some time to play in the play area before closing time was upon us! As you can probably tell, we love Marsh Farm. It’s the one play I can guarantee us all to have fun no matter what the weather. They are always adding and improving too. I’d highly recommend taking a visit at the weekend this September as the Dinosaur Dig continues. Please let me know if you went as I’d love to see some photos!

Disclosure: This is a collaborative post.
Share
Previous Siblings 2018 – September
Next Back To School With Moj Moj