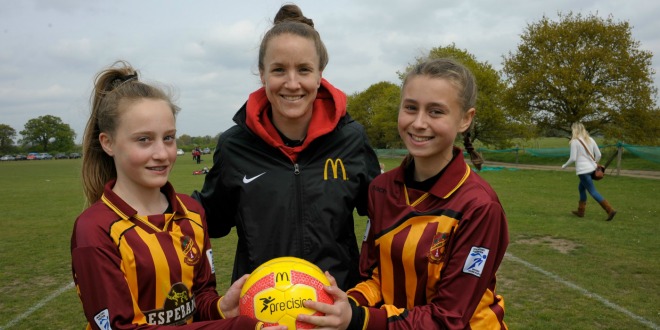 We are yet to embark on the life of school clubs and other hobby related activities. P1 just isn’t that type of girl and certainly isn’t an active person due to her hypermobility. However, we were recently invited to a local Football Club to meet former Team GB Captain and Arsenal Ladies Defender Casey Stoney as part of the drive for nominations into the McDonald’s Football Mum Of The Year Award.

I was so excited about going and letting the girls try something new but unfortunately it coincided with their monthly weekend with their Grandparents in Essex so we had to miss it. I was sent some pictures and some of the little dudes I recognise from a blog I’ve followed for a long time and makes me even more gutted that I didn’t get to go. The McDonald’s Football Mum Of The Year Award was designed to recognise the mums who go above and beyond to allow their children, and friends, to play and enjoy football. This sounds like such a silly thing to celebrate, being someone who doesn’t actively watch or follow football but actually there’s quite a lot of tasks that go into being a Football Mum. The washing of dirty kit, not just their own child but the whole team in most cases, then there’s all the driving to a from training sessions and various games. McDonald’s want to thank and celebrate the mums that will do anything just to see their son or daughter kick that ball with a huge happy face.

On the event held at Petts Wood FC, Casey Stoney met 100 young footballers, a mix of girls and boys aged 3-15 and the wonderful volunteers that help to make the football club the success it is today. Casey then went on to run a special training session with fellow local Mummy Bloggers and their children (green eyed monster alert).

Football is actually such a fantastic sport to play as a child. It involves team playing, learning many skills like coordination and social development. It’s fun too. I think as a mum of three daughters I never really thought about football as a sport for them to play. I’ve overlooked it as a “mans game” and quite wrongly so.

Are you a football mum? Do you know someone who goes the extra mile to make sure she’s watching on the sideline for every match?  Are you up super early this morning driving your child to football? Nominate in the McDonald’s Football Mum Of The Year Award here. Nominations close on the 19th June 2015.

Share
Previous Mixing Up Play with Petits Filous #MagicSquaresPlaydates
Next “Along trotted this small, scruffy looking dog. In a preschool”