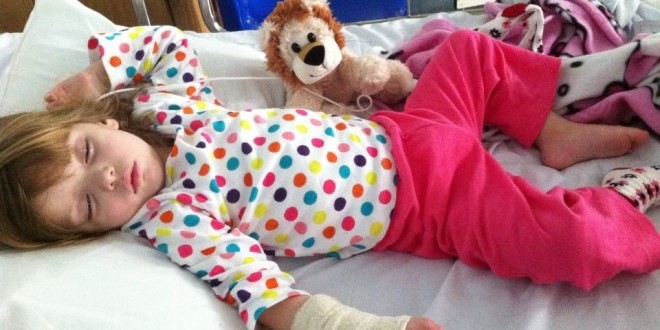 I’ve previously mentioned about P1s joints and lower limbs. I thought I’d go into a little more detail about it.

We all get excited about our children’s milestones. P1 was slower than average on reaching her milestones:
Sat up at 10months. Crawled at 12months. First steps at 16months. However, she was saying her first words and speaking in sentences by about a year old. Very ahead of average. We’d been told that she’d reach her milestones roughly two months after the “average” as apparently that’s the way it works with premature babies.

Despite her slow milestones being normal for her – there was something not quite right in her walking. Her feet were turning inwards and she didn’t seem to have an arch. When seeking medical advice I was repeatedly told that P1 was normal. But I was convinced this was not normal! So I spoke about it with my health visitor who told me to go back to the doctor and push for some physiotherapy.

We were finally referred to a children’s development centre. Who gave us exercises and ways to strengthen the arch in her foot. Apparently the inward walking was normal for children who were still learning to walk properly. Still not completely convinced by that as she had been “walking” for a year at this point.

Finally, the physiotherapist referred us to a consultant there and we were seen in sessions with a more qualified physiotherapist. They mentioned the possibility of P1 having some form of cerebral palsy. Scary! They assured us that some people can have it without ever knowing and that it wasn’t necessarily a bad thing for her.

They arranged for an MRI as all of P1s other developments were normal – drawing, speech and her upper motor skills.

This was a picture from 1st March 2012. This was after she’d had her MRI and we were waiting for the sedation to wear off. It was such a traumatic day but P1 was the best behaved child out of the 6 children having MRIs that day. She sat and happily played on the bed, she was talking quietly to us and she didn’t even flinch when having the cannula drip put it. We were the first to arrive that day and the last to leave due to her sedation taking a little longer to wear off.

The results came back clear. And to this date they have not been able to diagnose what’s causing her legs to be weaker and more flexible at her joints. We still attend physio sessions.

It does effect certain aspects of her life. She gets tired quicker especially on more active days like swimming days or when we go to an indoor play centre. P1 has improved in the past few months.

We try and do activities that push P1 – make her really need to work her muscles in her legs. We’ve done horse riding, ice skating, indoor and outdoor play areas. Alone – she’s having a great time. But when you watch her with other children her age it really shows how different P1 is compared to them. She doesn’t let it effect her though and she soon lets us know if there’s something wrong.

We always have her pram with us when going on outings. A lot less now my OH carries her a lot of the time. It worries me that when she starts school she’s just not going to cope with the full day! We’ve been deciding whether a buggy board or a double pram will be needed. My OH has pushed for just the buggy board and to see how we cope with that.

Share
Previous No Hope
Next Breast Is Best – Or Just Embarassing