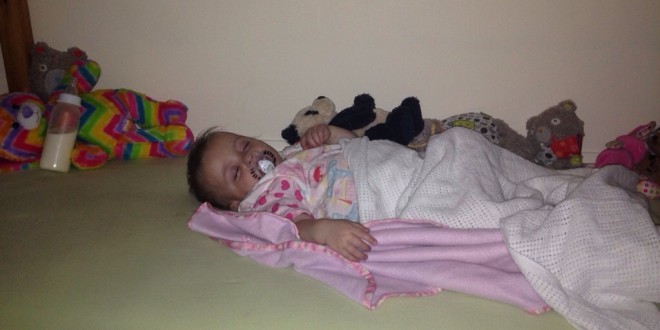 “Moving into a big girls bed!”

With our third baby’s arrival fast approaching we thought it was about time that we started making the changes in the sleep arrangements for the girls, well P2 actually.

We’d decided that instead of getting a new bunk bed that we’d be cost effective and just put a standard single mattress on the floor for P2 under P1s high sleeper bed. With the arrival of a new stair gate Tuesday for upstairs and being Little Miss Impatient, we plonked P2s cot mattress onto the floor and embarked on her newest journey. Moving into a big girls bed!

It didn’t go too well I have to admit. I wasn’t entirely sure what to blame; P2 refusing to drink her milk, the crying hysterically most likely due to the change, or the fact P1 was messing about yet again disrupting everything.

I did the normal routine just as if she was still in her cot. Typically, she kept getting up and attempting to wiggle around the room in her sleeping bag. I laid her back down countless times and offer her milk which she kept refusing. When eventually she cried herself to sleep, P1 decided it was a fantastic time to jump about her bed, run around the bedroom and get herself toys that were right next to P2 and therefore waking her up and she clearly thought it was just a nap as she was wide awake!

She was then awake until nearly 11pm. I spent an hour attempting to get her to drink her milk and lay down. I was relieved to see those little eyes close and had nearly fallen asleep next to her in all honesty! Last night went much smoother. Getting her to lay down took about two or three attempts and she was more than willing to drink one and a half bottles of milk before falling to sleep. Even the evening was much more settled than when she slept in her cot!! However, she spent most of her night hanging off the mattress or sleeping in the middle of the bedroom but surprisingly she only woke up twice during the night. I’m feeling a little emotional at the moment when I think about P2. It feels like her baby-days are being snatched from beneath us. She’s a full blown toddler now. Communicating more each day, understanding, going to the crisps cupboard when she fancies some wotsits, pointing towards her lady bits when she needs/doing a wee, she’s feeding herself completely, anything from soup to jacket potatoes and now she’s in a big girls bed… Although technically not I suppose!

I need to stop and cherish each and every second we have. Share
Previous “The weather has been truly glorious this past week!”
Next Pregnancy Diaries – 20 Weeks #3