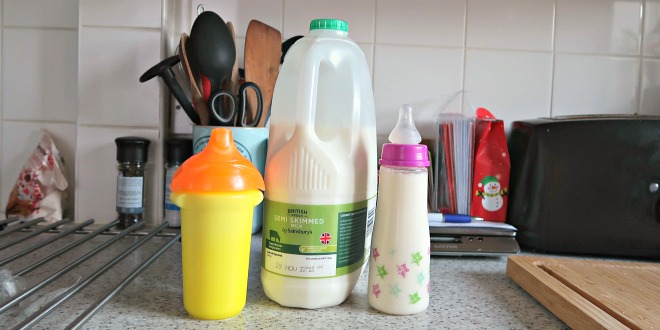 I hear the words “Mummy! Milky” day in and day out. It’s a 24/7 occurrence and it comes out of two of my three darling daughters mouths. I honestly feel like I’m going crazily insane about it. It’s controlling nearly every breath I take and I am so tired.

I’ll start with P2 seeing as that issue has been the longest standing so far. If you’ve been a reader here for a while then you’ll know that my four year old doesn’t sleep through the night.

She wakes mostly three to four times a night demanding milk. In the past I would just get it for her, topping her up each time with a full toddler bottle of milk. Probably about 9oz each time, on top of the two she’d have at bedtime, it’s a lot of milk being consumed!

She’s stopped having daily milk bottles since she was three ish but the night time waking has been ongoing. It’s a comfort thing, a habit and right from when she had her first breast feed she has used milk as a way to fall asleep.

For the past two weeks I’ve been refusing the night bottles. I’ve stopped her wearing her DryNites Pyjama pants that she was actually soaking straight through due to the volume of liquid she was having. I’ve been on a mission.

It’s weird because the first few days went well. I thought I’d cracked it. But apparently not. As I write this I have just dealt with a little crying episode because she wants milky and I’m not getting it. She’s still waking twice a night demanding milk, but she’s never getting it until the sun is up and it’s time to actually wake up. So I don’t understand why she’s still asking! Now let’s talk about P3 who is on a whole other level. Bottles, of milk precisely, are her only comfort thing. She’s specific about it. I’ve tried switching to a more grown up bottle but apparently the baby ones are her thing. And my gosh it’s draining.

If she feels anxious, insecure, tired, has hurt herself, or thirsty then she has this bottle hanging out of her mouth. I literally cannot leave the house without a bottle of milk. She won’t even drink milk from a cup at nursery which P2 happily did.

If we haven’t got that bottle of milk with us then you can expect a full blown tantrum and it’s a nightmare. God forbid I forget it. We had twenty minutes of pure screaming on the school run a week ago all because she wanted her bottle.

I’m trying my best to forget it and deal with the consequences. There are some days when she can be distracted or genuinely doesn’t ask for it. But it’s still there as a nasty reminder sort of like a torture thing.

She has two bottles of milk at bedtime but thankfully sleeps through most nights. I top her up if she does stir. It’s the day time dependence of it that drives me loopy. I just want those dreaded words to subside and to not be the boss of me any longer.

I have no idea how to cap the milk craving. I want P2 to sleep so that she actually gets some uninterrupted sleep for the first time, she’s exhausted permanently and grumpy! I want P3 to wander around a supermarket or go for a day out without a bottle hanging from her mouth.

Please somebody send me some tips?! Also whilst I’m here, I would love it if you could head over to Facebook/Twitter/Instagram/YouTube and give me a follow you can find me by searching @lwpprincesses