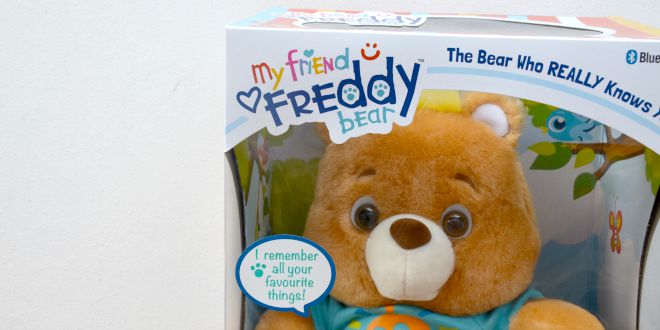 At BritMums Live there is a chance to connect with brands face to face. It’s a fantastic way to really engage with someone especially when you recognise a PR team. But there was a stand that really caught my eye. A gigantic teddy and some friendly looking ladies. I approached and was introduced to My Friend Freddy Bear. I could see him becoming the next “big thing” for kids. He’s the bear that really knows you. Earlier this week we were sent a My Friend Freddy Bear to review. I’d opened the box and left him on the side. P2 immediately caught sight of him and asked who it was for. When Hubby had told her it was for her from mummy she came running over to me saying “thank you Mummy. I love him”. I nearly cried.

My Friend Freddy Bear is an interactive talking cuddly bear. Although he cannot physically understand you and talk back, you can pair him up via Bluetooth with an Android or IOS app. There are 50 questions that you can personalise to your child. He is suitable for ages 2+ with three different “difficulty” ratings. The app includes story time and games where Freddy Bear talks to your child and helps your child to play the games. One thing I will mention is to remember to stop the pairing after each use as I got a bit of a fright when he started “speaking” the YouTube video I was trying to watch one evening. I find him pretty creepy. His voice is what puts me off him if I’m honest, Freddy has an old ladies voice that sounds very much like a robot. Not quite the loving, cuddly teddy bear but like I said the kids are certainly not put off by this and are obsessed with him. We’ve also found when my phone is connected to Freddy that all notification sounds are played through him. He also doesn’t like being laid on his back or upside down and will let you know this over and over again until you turn him.

These are little niggles that I have with the bear. Noisy toys are so frustrating to a parent but for a child, who absolutely adore music and noise, toys like My Friend Freddy Bear are a great hit. P3 has been particularly drawn to Freddy. She’s even been caught hugging him so close and just stares at him fondly as he speaks to her. You can use My Friend Freddy Bear without being connected to the app, he has plenty of loving phrases to keep your child interested. He is activated by pressing his tummy. A friendly, talking bear compatible with IOS and Android.

User Rating: 3.35 ( 2 votes)
Share
Previous “The six week holidays will help to boost my personal blogging”
Next Saving for Life’s Big Moments: Where to Make Savings