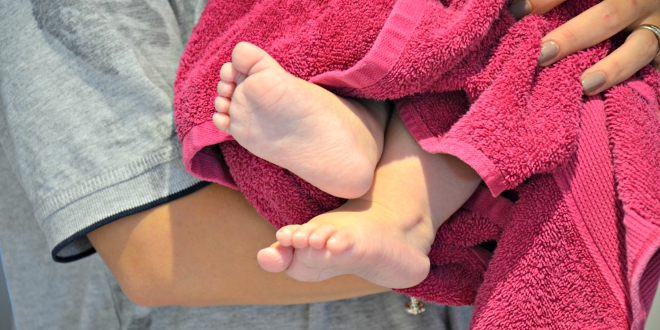 “My last baby is growing up”

Life is being pretty hectic lately. It’s so nice to have a routine back though now that school is in full swing for P1. She’s even started swimming again already and we’ve picked out some clubs that she wants to attend during and after school. Her options are much bigger now she’s in Year 2 too. Then there’s P2 who has had her introductory session at nursery and will be embarking on nursery life properly, without us, on Monday. There in the background is my littlest baby who’s happy enough to tag along on the school run, be dragged to various playgroups and Gymboree now that life is busy again and the holidays behind us. Although she’s certainly not easy to forget as such, it’s not that easy to remember all the big things that she is about to go through too.

In just a few weeks, at the end of this month, she’ll be celebrating her first birthday. As a parent we say it all the time that time goes so quickly and that they are only young once. I’m finding that out the hard way. It feels like such a long time ago that she was that very small wriggly, dramatic and screaming newborn. The little one that entered the world in a worrying fashion and scared us all half to death, especially her Daddy. The weight gaining struggles we faced and her tongue tie. It was all so long ago yet I can picture it as if it were yesterday. P2 was taking steps by her first birthday but this little one hasn’t even shown any interest in standing unaided let alone putting one foot in front of the other. But turning one does hold other exciting things and very sad things too. It’s sad because my last baby is growing up. There will be no more newborn cries, tiny cuddles and even smaller outfits. Crawling will soon be long behind us and a little toddler will appear from the cracks.

She’s already sporting a fierce personality and can be absolutely hilarious at times. I love the way P3 “shouts” at her sisters or other children when they have done something to upset her. I also love how she’s naturally formed her own routine. She’s advanced, I’m bias I know, and is able to climb nearly everything and safely get back down backwards. I’m glad she doesn’t use a dummy. I’m thrilled she’s still wearing 9-12months and the more grown up clothes are still a little further away from being retrieved from storage.

We’ll be going onto cows milk at one. We’ll be having a home-made cake smash and taking a little trip away to celebrate her birthday, my birthday and our wedding anniversary. I’m going to try to not ball my eyes out as we celebrate the 365 days of P3s existence in the real world and cherish every single day with have as a family of five. Before too long it’ll be P3s introductory day at school and I want to make amazing memories in the lead up.

How did you celebrate your child’s first birthday?