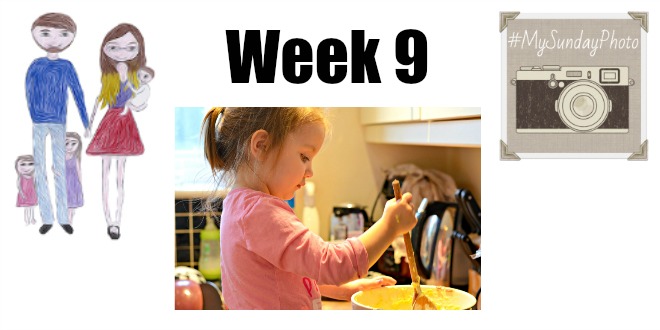 We were up and out the door this morning for 9:30am to drop P1 off for her first service as a Brownie. It was the divisions Rededication Service and we were invited to go along and watch. I hadn’t realised it didn’t start for 45 minutes after we dropped P1 so we reluctantly decided just to pick her up at 11:30 and pop to my MiLs. I am so grateful that my MiL suggested Hubby and I go back and leave the other two with her. I was desperate to be there to support P1 during this service even though she didn’t really have a role. I had planned on taking a photo of P1 outside the church in her Brownie uniform but unfortunately with all the excitement I completely forgot.

So this Sunday’s photo is still from today but it’s of P2. One of my New Year’s resolutions was to say yes to the girls more, I nearly said no because there was a huge pile of washing up to get through, toys out all over the floor. But because her baby sister was having a nap I decided to bake. This time letting her do everything except the measuring of ingredients. It was really lovely to spend some calm, one-to-one time with her and watching her little face as she explored the textures and created cakes all by herself.