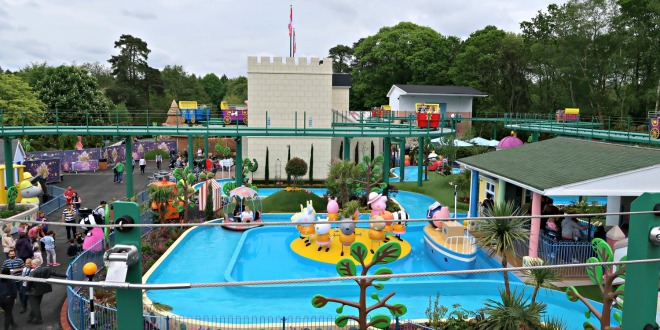 Our favourite family theme park is most definitely Paultons Park and there’s no secret about it. We love the variety of things available. We recently received a Royal Invitation to the Grand Preview Days of the two new rides in the Peppa Pig World part of Paultons Park. The girls were thrilled. Sadly P1 was still suffering with chickenpox so she had to stay with my mother-in-law for the day. I drove us the nearly two hour trip to Peppa Pig World. These days it’s quite rare for me to drive our car so this was a big deal. We had plenty of time to spare so stopped off at McDonald’s before reaching Paultons Park. We were handed with our VIP Special Guest passes. We know Paultons Park like the back of our hand so headed straight for the Grand Preview of the new expansion area of Peppa Pig World. As it is only open to the public from 16th May, the area was still secured off and on entering we was greeted by the lovely team and handed a huge gift bag of goodies for the girls. Obviously all the treats were Peppa Pig themed which delighted them both. P2 is definitely heading to the age where she may no longer like Peppa especially if she’s with her big sister, but on this day you could see the adoration she still had for the friendly pink pig. There are two new rides in the Peppa Pig World expansion; The Queens Flying Coach Ride & Grampy Rabbit’s Sailing Club. There is also new food facilities and toilets in this area too. Obviously everything looked brand new because it is, but I just love how all of Peppa Pig World is so colourful and aesthetically pleasing. We hopped on the Queens Flying Coach ride first. P3 screamed to start with as the ride tracks look similar to bigger rollercoasters but she soon settled down once she realised that it was ultimately a train ride in the air. There are no different heights or speeds, it’s a really gentle family for all of the family. You can hear a conversation between the Queen and Peppa as you go along. It’s a great opportunity to view the rest of Peppa Pig World too. We hopped off to grab a quick Peppa Pig themed cupcake from one of the stalls and then we walked round to the second new ride. Grampy Rabbit’s Sailing Club is a really gentle river ride. It seats four people. There are cute little scenes as you ride along the water. This one does spin slightly as the water washes you along but it’s nothing crazy. It’s a really lovely ride actually and we all were laughing throughout. By the way, how cute is the wall behind us in this photo? There are plenty of opportunities to photos around the new expansion area. Like I said earlier, everything is just so bright and colourful. I tried to spy out any other bloggers I may know and failing miserably it seemed that all the bloggers I knew had gone to the event the day before. We decided to head round to Paultons Park to do the bigger rides for P2 our crazy rollercoaster loving child. People sometimes forget that Paultons Park has other areas that are perfectly suitable for all the family too. There’s even a bouncy castle, dinosaur safari and two little toddler rides specifically for the youngest of riders to go alone. Our day seemed much more relaxed yet a bit erratic than previous adventures to Paultons Park. The girls spent more time than usual in the playgrounds rather than the rides. It was quite refreshing to explore in a different way actually. Of course, we didn’t miss out on the big scary rides for P2. We decided to head back into the new Peppa Pig expansion area for another go on the two new rides and to see if we recognised anybody else. The staff had provided some refreshments for the special guests so we hydrated ourselves and P3 ate many, many cupcakes. They were pretty delicious actually. Then whilst we was on the Queen’s Flying Coach ride I spotted the Saccone-Joly’s. I sort of went into a fan girl panic mode. Hubby thought I was a complete idiot because he didn’t realise until afterwards that the Saccone-Joly’s are actually rather big YouTubers with nearly 2 million subscribers. He urged me to say hello and somehow I managed to stumbled out some words, meet the Saccone-Joly’s and grab a photo with them. It all sort of went by in a blur and there’s no doubt that they probably thought I was a nutter. After getting over my fan girl moment, we headed into Peppa Pig World. It was a Saturday so the queues for rides were pretty long but nothing unbearable. I’d highly recommend not going at the weekend if you are able too as it’s much less busy during weekdays. P3 was absolutely desperate to ride Grandpa’s Train so that and George’s Dinosaur ride was on the top of our list to visit. The girls also really wanted to go in the playground which as I said earlier, is something they don’t usually do as we try to fit as many rides in as possible. P3 managed to fall asleep whilst waiting for Hubby and P2 on a ride she didn’t fancy. We used the opportunity to do some of the bigger rides again over in the Dinosaur area. We then woke P3 up and she became much less grumpy and full of life whereas P2 had started to flag from tiredness. We always leave the soft play area until very last, it’s much less busy nearer to the park closing time. P3 had a brilliant time whilst P2 sat half asleep on our laps. She had decided to start her day at 4:40am that morning due to excitement so I had expected her to be pretty exhausted. I would highly recommend making a visit to see the new Peppa Pig rides and spend a day at Paultons Park. There is so much to do for all ages and even animals! Check out my video of our day below and please do leave me a comment below.

Disclosure: This is a collaborative post.
Share
Previous You Are Not A Failure, You Are Not Alone
Next Siblings 2018 – May