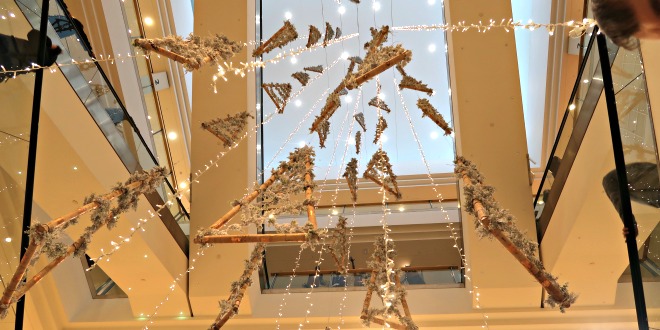 Hubby and I spent the end of 2016 without our girls. It wasn’t an easy decision to make, especially on Hubby’s side. He definitely felt sentimental about the situation but I reminded him that they would all be fast asleep anyway and they’re all too young to understand what a new year means. The fact that Christmas had pretty much blown our house into a chaotic situation, swayed our decision to see if my Mum was free to have them.

I was pretty excited about being child free. We usually spend New Year’s Eve round my MiLs and go home around 9pm when the girls get too ratty to stay awake any longer. I was really looking forward to being able to stay until midnight and maybe have a glass of wine to celebrate too. Something we don’t usually do. It felt even more special because hubby’s Auntie and Uncle were still back from Canada. Hubby planned a lovely day out for us shopping at Bluewater Shopping Centre. It’s the January sales so I felt all excited to see if we could get any bargains. He also sorted a Groupon deal for a Bella Italia Prosecco Brunch which was absolutely delicious. Bella Italia is such a pretty restaurant. I had such a lovely morning in Bluewater, Hubby and I spent ages in John Lewis trying to figure out what containers I wanted for my bakery flours etc.

After getting home and binge watching some telly, we headed over to my MiLs for celebrations. They served up super delicious food, a homemade chilli, homemade coleslaw, salad and garlic bread. In the true fashion of my MiL, out came the board games and I decided to have a glass of wine. I would highly recommend getting the Pass The Pen game, it was hilarious!

We watched the fireworks on the telly and I was quite glad that I was filming because I probably would have cried otherwise. I feel quite sad but happy that another year is over. I feel like time is just whizzing past, my girls are growing, I’m getting older and the life I have ahead of me seems to be getting shorter and shorter as all these years pass by. But I am pretty excited to see what 2017 has in store for us.

Thank you to My MiL for always being such a thoughtful host. It did feel very strange not spending time with the girls until the second day of January, but they had the best of time with their Grandparents and even went on a day out to Tropical Wings. I was being sent photos frequently and I think they would have had a better time there than with us as the chaotic house was sorted into a more liveable state.