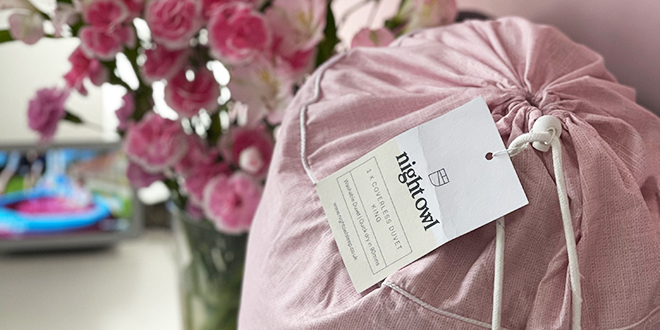 Do you love or loathe changing the bedsheets? Personally, I am the type of person who loves sinking into freshly washed linen, but I detest physically making the beds. In my household, there are always four beds to make back up on washing day and it’s like having a full workout for me as a smaller than average person.

I recently discovered Night Owl by The Fine Bedding Company. It’s a coverless duvet with recycled fibre fill. This intrigued me and I couldn’t wait for our new duvet to arrive, to hopefully transform the way I make my beds for the better. 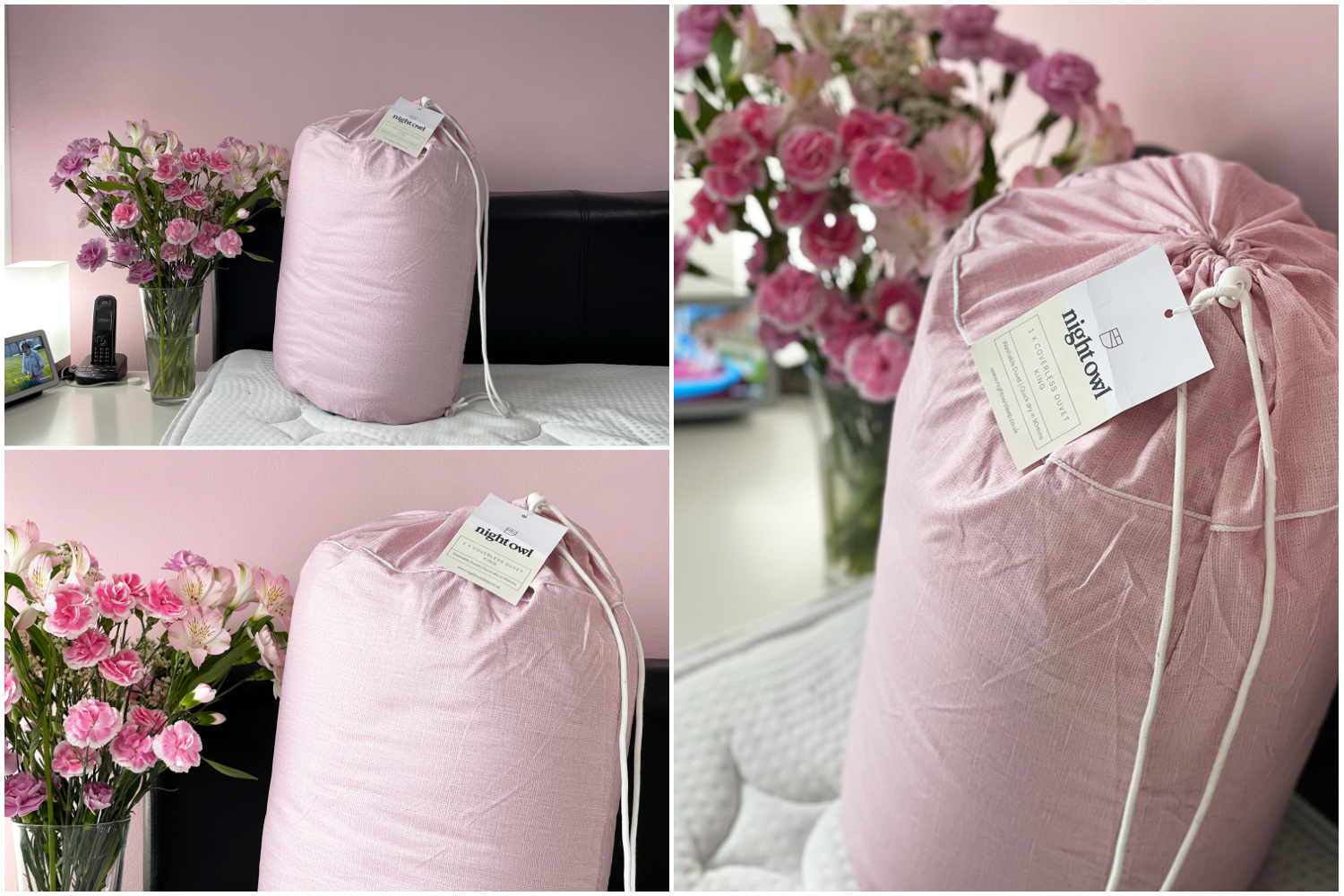 The Night Owl duvets come in three sizes; single, double and king. It took me a while to figure out whether I wanted it for our bed, the girls’ bed or to become a sofa duvet that we could snuggle under in the evening. In the end, we opted to have the King size Night Owl.

There are lots of colours available but of course, you could pop your own sheet cover over the top, but this would definitely defeat the object of the Night Owl. Although as a family we love a bit of grey, I eventually made the executive decision to go for the Dusky Pink and I’m so glad I did.

It also comes in either a winter duvet (10.5 togs) or a summer duvet (4.5 togs). We aren’t really a family that changes our duvet tog depending on the months so we went for the warmer winter version. It is actually eco-friendly as it’s been made with 100% Smartfil® Microfibre from Recycled PET Bottles.

These compressible fibres mean that you can put it in your washing machine at home. It squashes into the drum but also comes out plump and fluffy after the wash too. Personally, I was pretty pleased to see it can go in the tumble dryer on a cool setting! 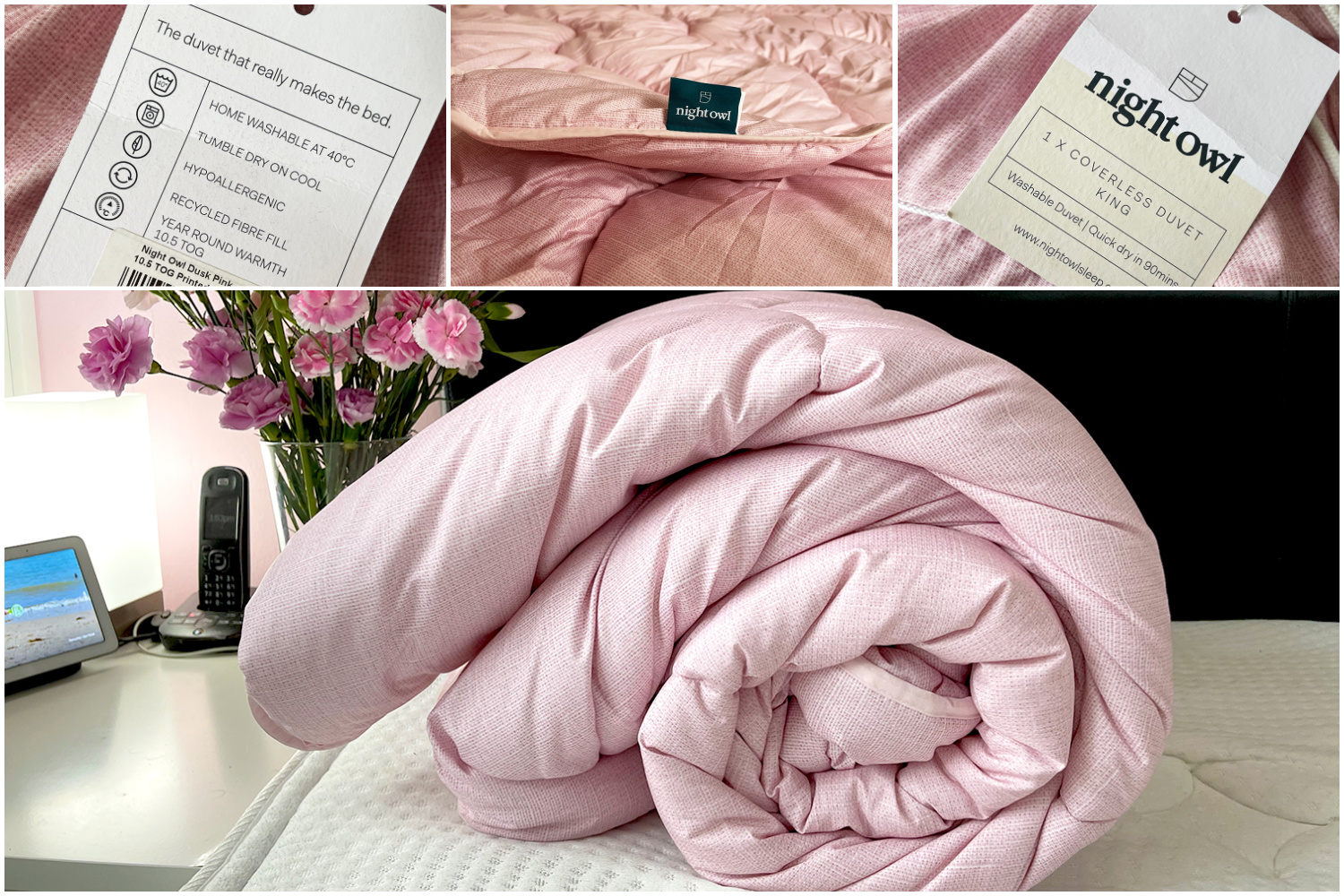 The Night Owl duvet arrived in its own reusable duffle bag. Have you ever tried to put a sleeping bag back into its travel bag? I’ve always found it super hard to do that! Putting the Night Owl back into its duffle bag was so easy and rather shocking that a kingsize duvet fits inside a pretty small bag. I have made sure to pop this somewhere safe as it will be extra easy to transport the duvet if we ever get to travel again.

This is the most lightweight duvet I have ever felt. It literally feels like it hugs you as soon as you sit on it, I would imagine a cloud feeling very similar to the Night Owl. However, the duvet had no intentions of becoming our main bed duvet. I have plans for it to be a sofa snuggler and also for out in the garden.

The reason I think it would be perfect for a garden duvet, to lay on the grass with or snuggle under on our hammock, is that it is so easy to be washed. It all simply squishes inside the washing machine. We can use it for warm summer nights playing in the garden. 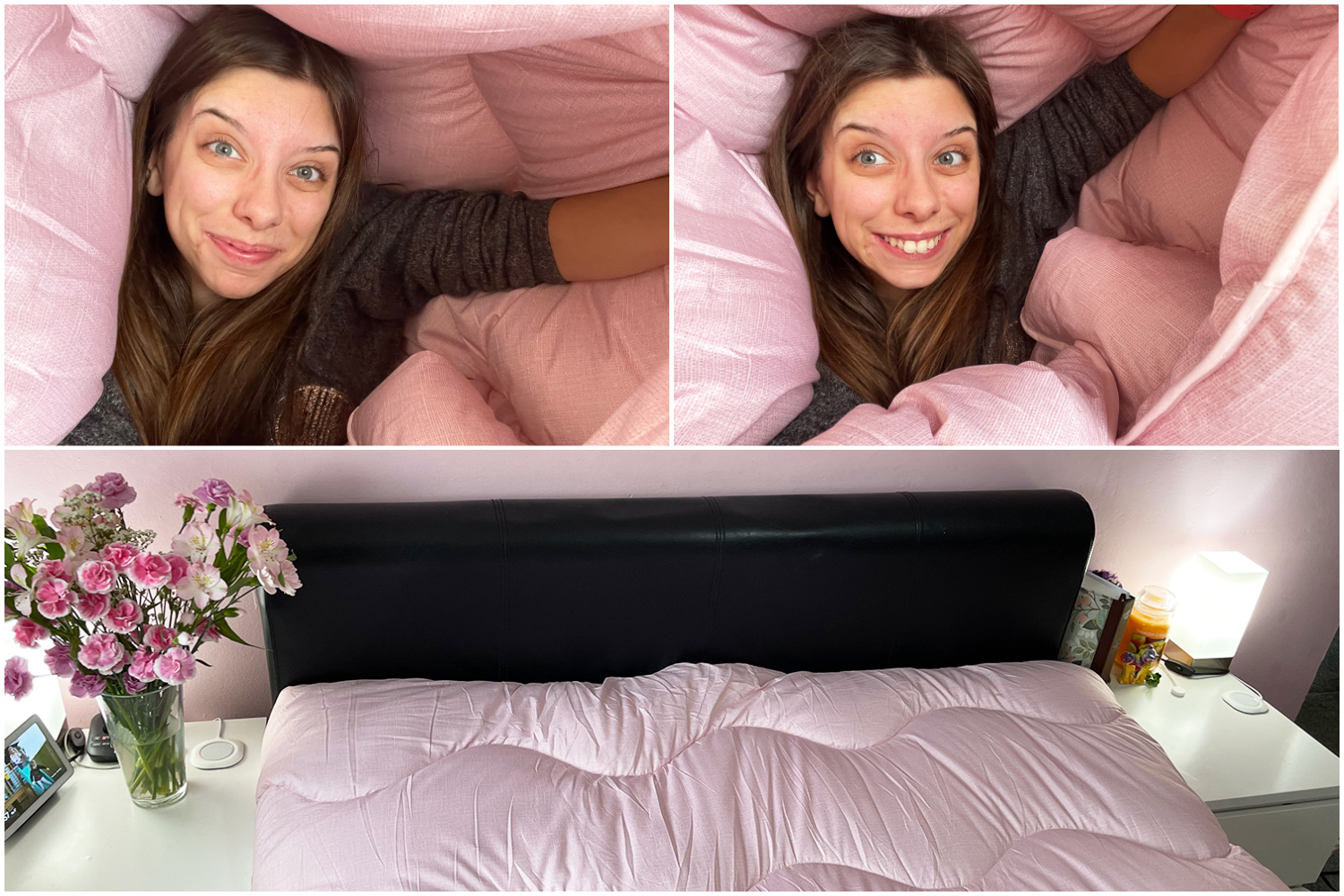 I have been extremely impressed with the quality of the duvet. I expected something made out of old plastic bottles, to be super uncomfortable but it’s far from that. We all absolutely love it and especially enjoy movie nights snuggled together on the sofa. If I wanted to use this on my bed, I would be so excited to never have to flap a kingsize duvet cover and scramble inside it ever again.

The duvet is affordable in price too, they start at £35 for a single and £55 for the kingsize. We will be using this all year round and I’m really excited for the summertime and getting to use it in the garden!

Disclosure: This duvet was gifted to us in exchange for a review. Opinions remain my own.

Share
Previous Siblings 2021 – January
Next Losing My Mum To COVID