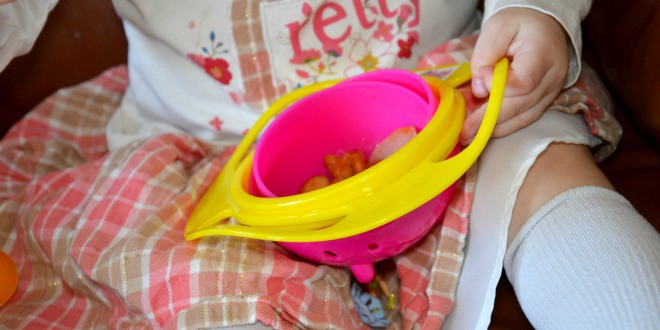 Children are notoriously messy eaters. Even right from the milky first sips of mummy or formula milk there will also be a tracing around their lips. When you move on to foods things end up on a whole new level of distruction. To clothes, to floors and of course to faces. Stains appear from nowhere and feeding times at the zoo can be rather stressful.

Gr8 Solution have come up with the perfect answer to a mess-free mealtime. The Giddy Bowl! The Giddy Bowl promises that it is non-spill therefore offering a mess free food experience.

Of course, when the bowl arrived my hubby laughed and started chucking it around and spinning it really fast then claiming it didn’t work. I was admittedly in hysterics. Then I read the little letter accompanying it which described what my hubby had done. The bowl isn’t designed to be thrown around just like, hopefully, your kids don’t throw their eating equipment around. It’s designed for those moments when your child is distracted and accidentally tips the bowl, The Giddy Bowl cleverly rotates keeping the bowl upright at all times. The Giddy Bowl is dishwasher safe and the outer part doubles up as a really handy drainer! The Giddy Bowl comes with a lid for transporting food and the handles around the edge are slim enough to be clipped onto a bag or pram so that you don’t lose it, although I personally think it’s too big to lose?

P2 really enjoyed using the Giddy Bowl, and although at times she found it hard to pierce her food with a fork as the bowl span round slightly, it did do what it says and keeps the food in an upright position despite P2 being a wriggle bottom.

Ingenious and fun mealtime tool for children of all ages! Keeping mess contained and food upright.

User Rating: Be the first one !
Share
Previous I want to be a woman not just a mum!
Next Childs Farm Bubble Bath and Hair Detangler Spray Review