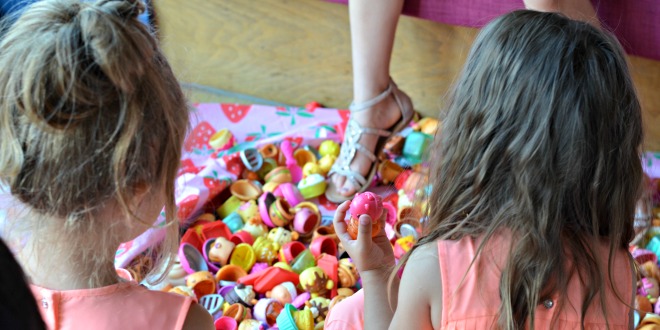 I don’t want to even imagine how many hours my girls have spent watching Num Noms YouTube videos. At first that’s all the obsession stretched too but then we were sent some to review. It was super exciting for all of us to be invited along to a Num Noms party at Bella Italia! In case you were wondering, Num Noms are cute scented toys that can be stacked on top of each other and make different combinations of flavours/scents.

There was a Num Noms party being held in many Bella Italia restaurants across the UK. We were unfortunately on holiday for our most local party so decided to head across the Thames to the Intu Lakeside venue. I’ve actually eaten at the Bella Italia in Lakeside before so knew where we was heading. Bella Italia had shut off half of their restaurant and made way for the Num Noms crew to take over. It was set out in sections with different activities and things to explore. The girls were immediately drawn by the huge playmat filled with different Num Noms. I reckon there was a good hundred and it seemed this was where all the kids were hanging out.

Slowly my girls dispersed themselves from the playmat and headed towards the huge queue for facepainting. Thankfully the “Design Your Own Num Noms” colouring station was next to the queue so I was given the job of waiting whilst the girls got creative. There was scratch and sniff stickers and plenty of colouring materials. Eventually, the girls were able to pick the Num Noms they wanted painted onto their skin. I desperately wanted them to have one on their cheeks but they both decided arms would be the best place. The face painter was so friendly and pretty darn good at her job if you ask me!

I managed to get P3 to sleep in the pram just in time for the other two to begin making their own pizzas. It was done in two groups and we happened to be the second set. Whilst the children made their pizzas, Bella Italia brought out a selection of their menu for the adults to tuck into. There was something for everyone. The girls designed their pizzas into smiley faces which I thought was super cute. Then they were able to head off and play for a little bit with the Num Noms. There was a “Guess The Flavour” station where the girls were blind folded and they had to sniff different foods to guess the flavour. That was such a good idea to keep them entertained. When Bella Italia had cooked their pizzas they were able to tuck in. I even sneaked a slice!

The party ended with some delicious ice cream before we headed home. I had such a lovely day and although when I first arrived I honestly thought it would be traumatic. There was a lot of people attending in such a small space but actually it went so well and the girls were really behaved for once. We managed to lose a beloved little toy dog at the party but other than that it was fantastic!