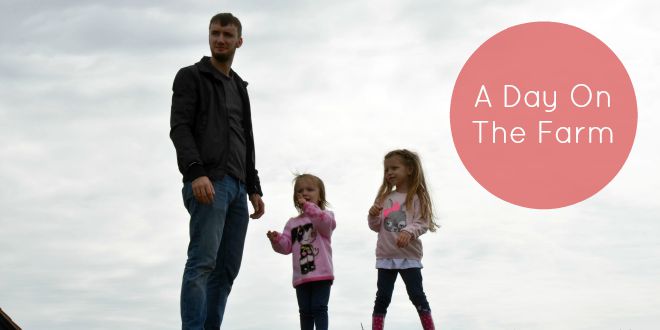 We are now in our summer holiday routine. The kids are generally getting along and with P1 soon to be going on holiday with her Great-Grandad for a large chunk of the holiday we wanted to do something as a family before her trip. We ventured back over to Essex to visit Old MacDonald’s Farm. I hadn’t been there since I was a child so was quite excited about the trip.

The journey was really straight forward and you can actually see the farm from the M25. We arrived just after opening at about 10:15am and there were already plenty of cars in the car park. There was a short queue but we soon made our way into the farm. It was exactly how I remembered it actually. Walking in on the indoor play area and the farm cafe.

We had a quick wander around but soon realised that the rides didn’t actually open until 11am so we went back indoors and let the girls play in the soft play. Hubby also ordered a cheeky early morning snack. The food was a reasonable price, not too expensive but not cheap, and tasted lovely. The staff were all very helpful.

The soft play was a little lacking in balls and most of the equipment was rather tall meaning P2 needed some help climbing but the girls had lots of fun letting off some steam from the journey. We then headed back outside to go on some rides as we wanted to beat the queues before it got too busy.

We managed to go on every ride except for 2; one that was closed and  one larger rollercoaster as the girls were too small (minimum height requirement is 1 metre). I did feel that the rides were very old fashioned but the kids really loved them especially the carousel. They were then able to have a jump on the inflatable castle, slides, two outdoor play areas and a combine harvester.

I did feel that there should have been some chances to get up close and personal with the animals. If there was this then there wasn’t any signs or leaflets to tell us when. P2 really wanted to ride on a pony as I thought she would be able to but there wasn’t. The animals all seemed very happy and we saw the traditional farm animals; pigs, sheeps and chickens along with a really old looking cat that loved being stroked by the girls.

I had a really lovely time visiting Old MacDonald’s Farm with my family. We were laughing and smiling the whole entire time and it was a very relaxed day. It would have been perfect if the wasps weren’t attacking left right and centre but that’s my own fear and not Old MacDonald’s Farm to blame. Entrance to the farm costs £15 on the door for adults and £14 for children over 2. It’s not a cheap day out for the five of us but it is definitely worth it to see the girls so happy and content. I would also like to note that under 2s are free, however they are not allowed on the rides unless they have a wristband which is an added £3.50. I didn’t think this is fairly priced, it should just be free under 2 or do what a lot of people do and pay from a certain height.

Have a look at our video from the day…

A lovely day out in Essex, combing animals with a theme park.