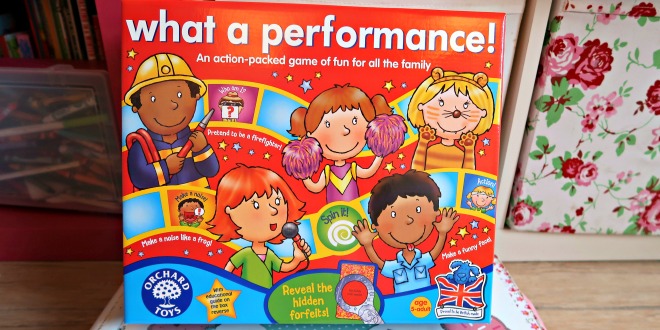 Orchard Toys What A Performance! Review

I am finding a real love for collecting board games and puzzles since I became an Orchard Toys Ambassador this year. I had always thought it was something my girls wouldn’t enjoy very much due to poor attention span but actually they love playing games together. We was recently send the What A Performance! board game to review. What A Performance! comes with a four piece puzzle style game board, a spinner, dice, four counters, the cards, a magic decoder and sand timer. On first play you need to make the card holder and pop out all of the cards. It is super simple to set up and the instructions are pretty simple. The aim of the game is to go around the board and get to the centre. Along the way you may land on certain actions which you have to do. These actions are found on the cards and the majority of them are just funny, silly things which is good for younger players. If playing as a team I think that my three year old could also take part. The other team members then have to guess, the first person to guess correctly gets to move forward one space. If no one guesses or the player wishes to pass, then a forfeit has to be done which can be found on the back of the card using the little decoder. I managed to grab some time to play this game with P1. We never seem to get moments to do things like this so it was really nice to be pushed into playing a game. P1 reads well and I think she liked playing the game. The game was definitely pushing P1 to be confident by doing silly things. The What A Performance! game also encourages discussion, imaginative play, develop number and counting skills. I can imagine us having a lot of fun as a family with this game and we plan to take it with us on Christmas Day to my MiLs so we can play as teams. I think I’ll also bring this one out for play dates too as I found the game perfect for children and with things like “curl your tongue” it’s a really simple and enjoyable game. I filmed us playing the game which you can see below. The What A Performance! game costs £15.95 and would make an excellent present!

This game is so hilarious. Perfect for young players and adults too. Brightly coloured board and simple game of play.

User Rating: Be the first one !
Share
Previous Save The Children Christmas Jumper Day 2016
Next Playbrush Toothbrush Review