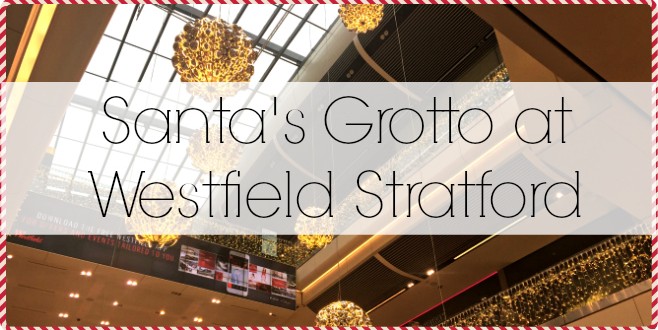 It’s December. Where the heck did this year go?! December means it is the run up to Christmas and of course that means decorations go up and presents are either bought or definitely about to be. We were invited along to Westfield Stratford City for the girls to visit Santa. We only told them about our trip the day before but I had been so excited about it since it was arranged. I have never been to Westfield before and was totally amazed at the sheer size of it and even though it was a good hour and half before all the shops actually opened, the place was heaving! We went into a couple of shops; Hubby wanted some new jeans as his others were falling apart and we needed to grab a few presents for family members. Our visit to Santa was arranged for 1pm. There was some slight confusion at our check-in but it was swiftly sorted out and our photos were taken for our Boarding Pass to the North Pole. The Adventure To Santa’s Grotto is a Shrek themed interactive experience. At the door of the house we were greeted by a lovely Elf called Tinsel who explained some rules and invited us into the Grotto.

In the first room was the flight area. Unfortunately our flight to the North Pole was cancelled so the girls had to learn how to fly a sleigh. iPads were available with an interactive game where the kids have to swipe left/right/up/down and avoid obstacles. P1 was actually the first to get through the finishing line. It was so festively decorated and really beautiful. It really helped to bring the anticipation to life.

We then moved into the next room of the house where we were greeted by a Christmas sleigh. We managed to get front row, there was another family joining us in our adventure to the North Pole. There was a curved screen just like the cinema and Shrek appears along with all the other famous characters like Donkey, Puss in Boots and Fiona. We joined them on a flight across the globe to the North Pole. P1 actually shouted out at the beginning “I don’t want to go on this ride!” because she genuinely thought it was a real rollercoaster. Even P3 was clinging tightly to Hubby.

When we arrived at the North Pole, we were greeted by more Elves and had the chance to decorate their own Gingey on the iPads before heading in to meet the big man himself. The room Santa was sitting in was so stunningly decorated, toys and books all over the room. It was amazing. The girls went all shy even P1 who normally chats the ears off of everyone. P3 was really intrigued and couldn’t take her eyes off him. The usual chat went on about what they want for Christmas and then they were given some Shrek ears with a tiara each.

The whole experience was very different any visits to Santa I have ever been on. The girls were so thrilled by it and I’m so thankful to have gone. As an adult though, I was a little disappointed with the gift, it wasn’t wrapped but the girls have really enjoyed playing with them at home so it obviously doesn’t bother the children. The house was lit up with animation featuring Shrek and Fiona, it was quite spectacular.