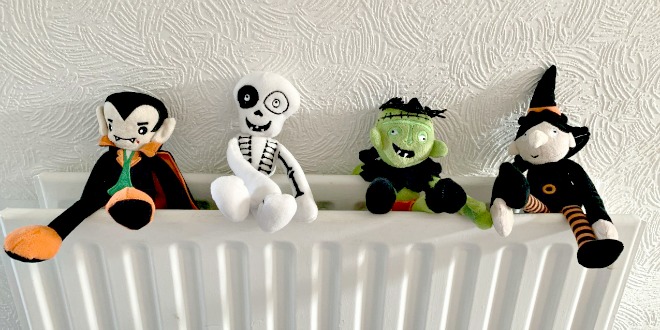 I didn’t want to fully submerge myself in Christmas before acknowledging the Halloween we had this year.

As a Christian I’m not meant to “celebrate” Halloween. So I sort of tend to try to slip our fun quickly past before anybody notices.

The truth is, I don’t think it hurts my family or myself to take part in the fun of Halloween. Like many other holidays or events of the year, Halloween is extremely commercialised and I’m pretty sure most people don’t even know the true meaning behind Halloween. Last Halloween, we had just moved house and didn’t have any decorations so we popped a pumpkin out the front of the house and a bowl of sweets whilst we went trick or treating in the local roads.

We soon realised that our little neighbourhood took part quite heavily in decorating for Halloween. So once the shenanigans had finished, Hubby headed off to Waitrose where he found so many decorations for literally pennies.

I was pretty excited about putting some effort into our home whilst making it still very child friendly and not about the dark side of Halloween. Our decorations mainly focused on pumpkins, bats and a few spiders. P3 and I had a lovely afternoon decorating together. It was a brilliant bonding experience.

When the girls returned home from school, we had just about enough time to carve the pumpkins we’d picked a few weeks ago from the pumpkin patch. We then headed off for our church’s not-Halloween party.

Our church put on a little party for children so that they could be a part of something fun. They had face painting, balloon modelling, biscuit decorating and a magician. The girls even got fed a brilliant picnic lunchbox all for absolutely nothing. It was a great party!

It was dark by the time we got home. Our house looked so cute with the decorations and pumpkins. The girls were so excited.

It was much later than we wanted to be out trick or treating, about 7pm, so a lot of houses had run out of sweeties. But we still had so much fun spending time as a family.

The girls obviously all overloaded on sweets and we still actually have some left over even now, half way through November. I don’t think we’ve caused any harm by taking part in Halloween. It was actually such a wonderful day spent as a family.